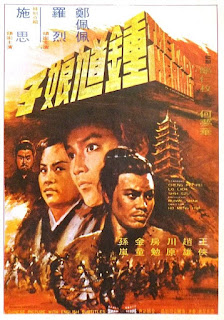 After reacquainting myself with King Hu’s seminal classic A Touch of Zen, I found myself eager to dig through some other 60’s and early 70’s female lead wuxia films that I have not seen in a long time. A great place to start is always with the combination of Shaw Brothers and the iconic Cheng Pei Pei. Most people may like to think that perhaps her greatest film for the legendary studio was Come Drink with Me, also directed by King Hu, but for my money I would be tempted to say that the often overlooked The Lady Hermit is at least as good, if not actually being an overall better film. In many ways, The Lady Hermit is a more distinctly Shaw Brothers film in its stream lined narrative and gimmicky  villain, but this kind of stripped down and more entertaining approach allows the film to really throw in some massively effective action sequences while not taking time away from its active character building. The combination of the two is a film that’s easy to consume, but filling for its viewers with its punchy storytelling and fascinating character interactions.

The legend of the Lady Hermit (Cheng Pei Pei) has reached around the martial world and for a young and ambitious young woman (Shih Szu) it’s an opportunity to reach a new level of skill…if only she can find the elusive swordsman who has gone underground. In her attempts to find the heroine, she stumbles into a small town and befriends a charming man (Lo Lieh) who provides a clue to where the Lady Hermit may be hiding.

The Lady Hermit is one of those prime examples of why I believe in execution over originality. While 1971 was still a time period where many of the tropes of the martial arts genre were developing, watching The Lady Hermit now can be an exercise in following the formula. The wise master, her hot-headed protégé, and the plot point that sets them apart before they must reconcile to defeat the villain. By today’s standards of writing and plot development, The Lady Hermit follows the formula pretty strictly. Even the romantic triangle, formed by the inclusion of Lo Lieh – in one of his more diverse roles as the male romantic interest in the film – seems to be a predictable development that lends itself to the complications that separate our two sword slashing heroines. It works, but it’s this adherence to the structure and predictable nature of its narrative that is the only (and very minute) complaint that I have about the film. As I mentioned, in 1971 it’s not like those tropes were as rock solid as they are now so take them with a grain of salt.

The rest of The Lady Hermit though is a wuxia and martial arts dream of strong and charismatic execution. The film is definitely of the Shaw Brothers ilk with its gimmicky villain and more consumable nature that features tons of ambitious fight work, but the character work and the naturalistic narrative flow make it wholly enjoyable. From the very beginning, when we see Shih Szu come bounding into town and distributing rightful justice with her whip, the film clearly builds the characters as ones to care and root for as their stories progress. The romantic triangle is built in the perfect pacing and the chemistry between the two leads (and Lo Lieh as the lead secondary role) makes each scene fun and emotionally impactful. Cheng Pei Pei does steal the film as the titular heroine in white and proves why she was such a feminine force to reckon with in these style of wuxia films. They all own in their respective scenes and the action is plentiful to showcase their character chemistry in a multitude of ways. Director Ho Meng-Hua shoots the film in an artful enough manner to keep things from feeling too gimmicky (even with a villain who kills by throwing people) and it keeps the film pacing at a brisk and effective pace. Not to mention, I’ve never seen so many people killed by dishes before so it has that going for it too. By the end of the film when the two ladies must band together to find and destroy the long clawed villain, the film is as fulfilling in its character arcs, emotional beats, and exciting action as it is entertaining for those same reasons.

While a lot of attention has been given to the works of King Hu as definitive female led wuxia films, let us not forget just how effective and entertaining films like The Lady Hermit are at producing a lot of the feelings of accomplishment. While the film does seem a bit predictable over 40 years after its release, the execution of its concept is so strong and engaging that The Lady Hermit remains one of the best overlooked wuxia films in the genre, not just from the Shaw Brothers collection.