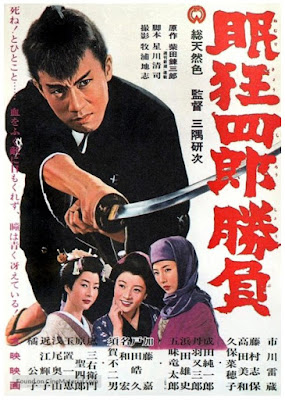 The first Sleepy Eyes of Death film was a decent sword and slash affair that found it a bit difficult to balance its thematic narrative with its entertaining aspects. It’s still a fun film, but hardly the iconic classic that I would have assumed it would be to spawn such a loved cult franchise. This is one of the reasons that it took me so long before getting around to the second film in the series, under the title Sleepy Eyes of Death 2: Sword of Adventure. However, the arrival of the massively underrated director Kenji Misumi to the series fold makes a world of difference for the tone and execution for this film. Instead of gimmicky villains and an almost tongue in cheek nihilistic approach to its characters, Sword of Adventure takes a politically charged approach and it creates a much smarter and streamlined affair that finds the balance between entertainment and depth of writing. It’s such a huge step up in quality that I’m now excited to see what the rest of this series has to offer.

Nemuri (Raizo Ichikawa), amongst his wanderings, comes across a fascinating old man who lets him in on a little secret. He’s the official in charge of money for the shogun that they are in and there’s somebody out to kill him because he knows too much. Normally, Nemuri isn’t into playing hero, but this man is truly out to do good and the corruption around him is seething. This is why our anti-hero decides to stick around and see what’s really happening with the political upheaval on hand even if it throws him into the path of danger.

While the first Sleepy Eyes of Death presented the character of Nemuri as something of a true anti-hero whose nihilistic tendencies and ego played a role in every decision he made, Sword of Adventure takes things a bit deeper for the character and plays him as something of a torn soul looking for something meaningful in his world of nihilism. This makes the character a bit more vague, despite his more heroic stance in the film itself against the corruption and greed of the political system he is standing against, but it also makes the character infinitely more interesting. Actor Ichikawa pulls this deeper subtly off well, using his charm to keep the audience interested in his screen presence and his cockiness that occasionally bubbles to the surface, but adding in layers of intriguing character that makes him a more well rounded protagonist. The chemistry he carries with the rest of the cast adds to this, particularly his odd “bodyguard/detective” role that he plays with the elderly financier (who is also remarkably charming, emotionally impactful, and executed with an impressive performance) and the semi-flirtatious moments he has with daughter of a restaurant owner, and it makes watching whatever situation he gets into riveting. Of course, the character’s arrogant and haphazard relationship with death continue to define him as an anti-hero and one that could be swayed to darker paths, but it’s easy to see why this character is one that has graced multiple franchises and various media formats.

Of course, having a great and deep character is only one aspect of why Sword of Adventure works so well, and the other is director Kenji Misumi. The plot itself is something of a regular one for a chanbara film where our wandering protagonist must face off against systematic corruption to help the people. If you’re a Zatoichi fan like myself, you’ve seen it a couple dozen times. However, it’s the way that Misumi adds a depth to the character set and the visuals that really adds to the experience. There are certainly plenty of intense and fast paced sword clashes and action pieces to satiate the cravings of samurai or swordsman films, but all of them have meaning. Each one, including what could have constituted a gimmicky scene where assassins attack Nemuri in a bathhouse, are there to push the narrative forward as much as entertain and this is Misumi’s trick. His balance for entertainment and visual fun with actual progression of the narrative is tight and effective here. By the time a group of various swordsman gather together to claim the head of Nemuri in the second act and then proceed to try and do so one by one (after a phenomenally atmosphere mist laden scene where Nemuri prods them), the audience is eager to see how it affects the characters and story rather than just give us more than just action where villains try and solve the deadly Full Moon Cut of Nemuri’s borderline invincible technique.

In the end, Sleepy Eyes of Death 2: Sword of Adventure is the film I wanted this series to have. It’s smart in its balance of focus, it’s entertaining with its action and characters, and carries a remarkable depth to its narrative and political themes about greed and corruption. This is the kind of film that truly raises the chanbara films above being the genre affair they are so regularly heaped with and it’s one that comes with the highest of recommendations for fans and non-fans of the style.