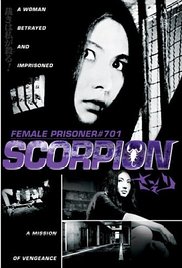 Exploitation films can be a massively hit or miss kind of thing. Firstly, either you get it or you don’t conceptionally speaking and secondly, the quality within that concept can be hugely diversified. For every Ms. 45 in quality there are a hundred pieces of generic cash in rape and revenge flicks. That’s my opinion anyway. It’s also the reason that my expectations for Female Prisoner #701: Scorpion were decently low. *For the record, I will just be referring to the film as Scorpion from this point out as that title is a bitch to type. It might also be the reason that I was impressed with the film as a whole too. While at times the exploitation can be a bit eye rolling as it seemingly forces in tons of ‘women in prison’ clichés, the resulting film is quite steeped in artistic merit and one that deserves to be seen as such. This is not just another pinku Japanese flick, this is one that rises above it in many ways.

Nami Matsushima (Meiko Kaji) has been left in prison to rot. Framed by her detective boyfriend, she is sent to a women’s prison for trying to stab him on the steps of the police station in a fit of rage. Now she is the thorn in the side of a corrupt prison system, desperate to break out to take her vengeance. With assassins in the same four walls and world outside that sees her as a social plague, Nami will have to strive her hardest just to survive…and figure out a way to fulfill her rage.

Scorpion presents a film that can be hard to love at first. The film is notoriously eclectic in its style and its approach to the revenge tale that takes place mostly in a women’s prison is often a bit off setting. Director Shunya Ito loves to keep the audience on the edge with a strange blend of serious dramatic beats, pitch black satire, and overtones of psychedelia that pop up in moments of emotional expression from the characters. The film starts off in a weird almost funny manner as we see the prison, being given a recommendation for their perfect service, have to scramble to prevent a prison break. The satire is evident in the ridiculousness of the prison guards and just how evil they are (or inept) and the film uses that as a contrast to the dramatic stabs of a borderline mute lead character. The first scenes of a psychedelic nature pop up in a flash back to why our titular character is in prison and the resulting memory is done in a stage play style with rotating sets, nightmarish angles, and bright eye burning colors, but these elements will repeatedly come to use throughout the film in various emotionally heightened scenes so if it sounds weird, be prepared to see it a few times.

The film is also very much driven by the titular character Nami, played with iconic face melting stares by Meiko Kaji. Oddly enough, she is hardly a character that is meant to be sympathetic to the audience. Her redeeming attributes are there in small subtle ways like how she protects the honest inmates around her, but the audience roots for her not because we feel the need for her to find justice, but because she is seemingly always at the end of a boot heel of injustice no matter if she deserves it or not and we want to see the unjust get what’s coming to them. She’s not a wholly likable character with her limited dialogue and her almost relentless pissed off demeanor, but it works in the film as she seems to be the lesser of all of the evils around her. She may not be a great hero, but she’s one hell of an anti-hero and it’s easy to see how they built a franchise around her.

Outside of the anti-heroics of our lead and the stylistic choices of the director though, Scorpion plays its exploitative foundations in a straight forward enough manner. The bad guys are bad guys, as evil as they are and the film fits in enough basic prison movie clichés to make sure that it doesn’t go too far off into its artistic elements. The revenge is always the focus of the character, the film has plenty of needless nudity for those looking for it (although at times it does seem as though Ito is using it as a sort of mockery of the prison system and the ineptness of the those who run it versus as purely exploitative material), and there is plenty of uncomfortable pieces of violence to keep the film down in the dirt. There is a particular moment where our lead is burned with a lightbulb that comes off as horrific and haunting, for example. So the foundations are still there.

Strangely enough, it’s the ending of the film that feels the most out of place and results in what might have been the perfect cult cinema film faltering a bit. By the time that Nami breaks out of prison to achieve her revenge, the film only has like 15 minutes left in its run time and her plot to kill her ex-lover seems to be rushed to fit it all in. It contains some nice moments of that dark satire and it works, but not nearly as effectively as it might have if it didn’t feel rushed.

For those interested, Scorpion is a fantastic piece of cult cinema that really blurs the edges of art and exploitation in the best ways. It’s hinged on a fantastic lead performance from Kaji and the over the top styles of the film carries a lot of impact on what might have been a rather cut and dry anti-hero/revenge plot. It’s effective in almost all of its elements and the way that it hooks its audiences makes it an instant classic. When there are plenty of mediocre films out there in the exploitation genre, it’s always nice to know that there are films that rise above the confines of its own genre to be game changers. This is where Female Prisoner #701: Scorpion succeeds the most.