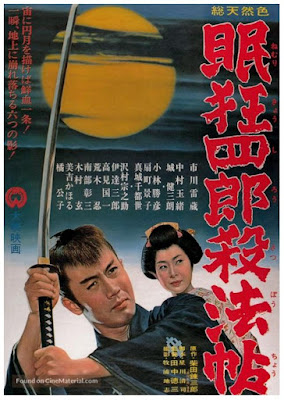 The Sleepy Eyes of Death franchise has always received a fair amount of praise from its cult fans and fans of chanbara films, so after finishing up the Zatoichi franchise I needed a new swordsman epic to focus my time on. The first film of this  portion of the series, which goes under a few different titles like The Chinese Jade, is a rather mediocre affair considering the hype that surrounds this series. On its surface, it’s a decently entertaining swordsman tale that takes a mystery plot and adds in a ton of pulpy popular elements to it, but the film thinks it’s much smarter and deeper than it actually is.

Kyoshiro (Raizo Ichikawa) is a notorious ronin, known for his lethal skills and the legendary Full Moon Cut technique with his blade. When he is randomly attacked by ninja one night and then approached by two mysterious strangers intent on hiring his services for seemingly small tasks, he decides to investigate. He uncovers a massive conspiracy by two rival gangs to find a hidden jade statuette. Two gangs willing to pay anything for his blade or kill him if he refuses.

As a chanbara film, The Chinese Jade certainly hits all the aspects that were popular for the style at the time of release. Larger than life characters litter a landscape of strife and ultimately good prevails by the sharp draw of a sword. There’s plenty of intrigue to be found in its plotting, although some of it seems downright ridiculous at times (one of the gang bosses that would like to hire our protagonist lives in an underwater lair), but the film keeps things light and fast paced which is only to its benefit.  Ichikawa plays off the arrogant swordsman Kyoshiro with a sort of relished delight and there is a ton of secondary characters that are interesting enough to keep the plot moving. The action is fun, although director Tanaka tends to shy away from keeping the fights intense as the audience never questions whether or not Kyoshiro will falter at any time even in the finale, and some of the smaller plot elements come together in amusing ways. As I mentioned, this makes The Chinese Jade a film that really works on the surface as an enjoyable piece of swordsman entertainment.

Because the film throws the audience right into the middle of this established world, it doesn’t often give a lot of explanation to a few of the enjoyable secondary pieces – including all the pseudo-romantic threads with various women – and the film quickly drops a few more intriguing plot elements for the sake of keeping the movie moving. As our hero starts a romantic relationship with the woman sent to spy on him, there is a love triangle established with a young ninja that’s kicked to the curb rather randomly in the third act. It almost seems like they didn’t know how to handle it so they tie it up with some awkward dialogue and shoo it away. This goes for a lot of the more thematic and dramatic portions of the story and character building. Familial elements seem washed over quickly and despite the film’s best efforts to give Kyoshiro some depth to his arrogant demeanor (including a scene where he curses his life on a water side cliff), none of it sticks. The film gets a slow clap for trying to add in some thoughtful writing, but it’s more of a pity response to its attempts versus its actual successes.

The Chinese Jade is a perfectly suitable chanbara film that hits all the necessary components to be entertaining. The way that it throws the viewer into the world of Kyoshiro and his cohorts is fresh and while the film struggles to add effective depth it does get enough done to establish the ideas of this franchise. If anything, the groundwork is all there to kick off this series in fashion and I hope that the second film runs a bit further with it. As a starter though, one could do worse than Sleepy Eyes of Death, but one could certainly do better too.

Written By Matt Reifschneider
Posted by DarkReif at 8:53 AM