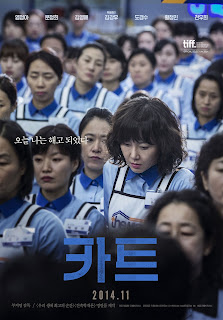 Boo Ji-young's Cart (카트), is a beautifully shot, phenomenally acted, drama that is strong on all fronts, though at times can get pretty heavy in trying to make you bring on the waterworks.

This film is based on an account of an actual strike a group of women brought to a supermarket when they were all laid off suddenly. I applaud these women (and eventually the man) who did something brave like this. Not enough people stand-up in this world to do what is right , no matter the consequence or pain it may bring upon you and others in doing so. I give the film props to the fullest for doing this. It greatly reminds me that one mustn't sit and take things as they are presented, if they are being presented with unjustly means.


Yeom Jeong-ah, playing the lead, does an extraordinary job in her role, being the quiet, mild-mannered worker who does her part in the store and goes above and beyond everyday to make sure her son and daughter have their basic necessities in life. While the daughter doesn't have much to say or do, she adds a nice relief of simplicity, juxtapose to the more complex and dynamic relationship between the mother and son (played by EXO member D.O). He's stubborn, a bit cold, but in the end he means well, and has a small, but nice arc, and I was glad that the film kept cutting back to him and what was going on with he and his sister. I was worried they'd be forgotten about, but gladly wrong in this case.

There are a lot of characters in here and they are all well fleshed out for the most part, some being less broad in how much they show you of their personal lives and personalities at times, but I feel like you really get to know them all, and the factor of relatibility is very real and present. It keeps the film going, and you so desperately went them to succeed and get what they fairly deserve. The film is a cold but real reminder as to how unfair life can be sometimes.

Another big positive that needs to be brought up is how well the film is shot. Off and on the entire time, I was like "Wow, what a great shot. Whoa! Wow!" and so on. The camera glides around, some of the framing is very interesting, you get a real sense of scope and power with the depth presented in the store and the distance the women begin to feel from their situations. Some absolutely gorgeous lighting is on display in several shots, and there is a very long take in which Kim Kang-woo's character is walking through the rally he and his co-workers have set up and it leads all the way to him taking stage and going quite far into a speech. That, perhaps, impressed me most of all.

The film is by no means perfect, and a thing that annoyed me was the music at times. There's nothing that takes me more out of a picture than overly blatant 'feel "this" emotion here' pieces of score, and it happens too often to keep track of here. The performances are so raw and real, and you already are so gutted by whats going on, that the music only beats it over your head to the point of annoyance at times.


This is more of a nitpick, but I think the ending was a bit too exaggerated and by that time was beating a dead horse. I really felt the film and it's importance and message, and it's done so well, but the very last shot and sort of last scene in general just put me off a bit. Maybe it's just me, but that last bit sort of letdown.

In the end though, Cart is a fantastic drama, and has seemed to really go under the radar. I wasn't really excited for it initially, but I picked it up recently sort of impulsively and am very glad I did so. It is yet another work of cinema from South Korea that really needs to be seen. I can't recommend this one enough, though I must warn that a few moments do get a bit too forceful in trying to make you feel a certain. That said, it most definitely comes recommended.