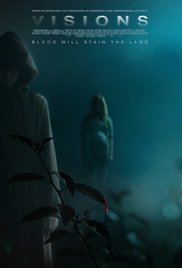 Digging through some of the straight to home video horror material can be a bit…tedious. As I’ve mentioned before, the more movies you watch then the more you realize that there hasn’t really been anything original in decades (outside of technological advances) and it’s all about execution. This is why I struggled so much with most of Visions. Despite some decent execution overall, Visions is hardly anything remotely close to even feeling original and it’s run of the mill first two acts is yawn inducing supernatural thriller basics at their most formulaic. However, the film is almost – so close to being saved by its third act where it spins off into some solid horror thriller set pieces. Still, it’s a little too late to save the entire film experience, but for those looking for a fun supernatural thriller you could do much worse than Visions thanks to this spin.

Eveleigh (Fisher) and her husband (Mount) are attempting to really start their life again. They have bought a nice small vineyard for a cheap price, invested all of their money in it, and she's pregnant with their first child. However, once there and settled, Eveleigh begins to have visions of a cloaked figure and odd things begin to happen around the house.

Considering Visions was dumped onto Netflix Streaming even before getting a home video release from Blumhouse, I already had my own hesitations of the film. When we are introduced to our lead heroine and her humble (or is he?) husband and their massive money investment in a small vineyard, it already seems cliché. Marriage under pressure? Check. Oh, wait she’s pregnant? Convenient excuse for those visions that her seemingly loving husband can question her with! Even the visions themselves seem rather mundane as she sees chairs move and a very unmemorable cloaked figure who seems intent on spooking her with knocking on doors and hovering over her in bed. Visions even has to throw in the super understanding, but quirky best friend to make things seem even more formulaic. Nothing about the film is scary, nothing seems fun, and it hurts that Visions is soooo formulaic that it goes about dragging the standard for two-thirds of the movie.

However, this would seem to be the intent of the film. The acting is standard stuff and the production values are decent, but by the time the third act rolls around the film has lulled the viewer into an expectation haze. We think we know exactly what we are going to get and then BAM! Visions hits you with a potentially film saving third act. It takes all of the rudimentary material from the first two acts and puts some inspired and effective spins on it. Not to give it away, truly these spins are the reason to see this movie, but the film takes all of the hum drum established elements and starts knotting them in unexpected ways. The tension is ratcheted up exponentially, the horror elements come to the forefront, and the execution of these pieces (albeit still not original) makes it feel fresh and effective. One of my favorite hashtags to use lately has been #SavedByTheThirdAct and Visions is a film that is most certainly saved by its third act plot twists.

Granted, getting to the third act is still a chore. Visions struggles a bit with keeping the viewer hooked for the entire film and if I wasn’t a dedicated horror fan I might have shut it off before it got better simply due to the fact that it was pretty uneffective for the first hour. However, stick with it because Visions really does pull a redemption trick by using its own faults to its benefit and by throwing in some slick twists and turns. It’s still hardly as smart or unique as one would hope and on second viewing the shocks don’t hold up quite as well, but I’ll give Visions an ‘A’ for effort even if the overall score slides down into the ‘C’ range.