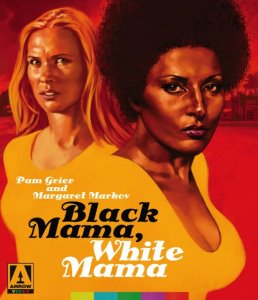 As mentioned in a few other reviews, 2016 is the year that I start exploring a few new genres, directors, and stars with open eyes. The ‘women in prison’ genre is one of those and truthfully, I have only seen a handful – with most of them being modern or foreign in nature. So the latest release from Arrow Video for Black Mama, White Mama fits right in with my new outlook. Granted, I don’t have the blessing of being able to really compare it to the context of its own genre – particularly since it’s a film that tends to be mentioned in conjunction with exploitation classics like The Big Bird Cage or The Big Doll House – so I will simply review it as someone new to the film. In this aspect, Black Mama, White Mama is a very fun film and one that earns some credit in the ridiculousness of how it plays out. It’s an uneven picture and it lacks the focus needed if it was actually going to carry a message to its adventure toned plot, but still…entertaining is as entertaining does and in that regard no one can overlook this film for how amusing it is.

Lee (Grier) and Karen (Markov) are up shit creek with little more than a paddle. They’re both in a women’s prison camp for various crimes and their relationship is tense at best. When Karen’s revolutionary friends end up freeing the two women during transport though, the very different minded runners will have to figure out a way to work together, while chained together, or neither will get to their ultimate goal.

Black Mama, White Mama is a loose remake, or knock-off is perhaps a better term, of another cult classic The Defiant Ones albeit with a gender reversed double lead. Since the 70s, this idea of having our leads chained together and fighting their way to their various goals has been done again and again and for those who have seen this idea in play before, Black Mama, White Mama is not going to be adding a whole lot of new material to the idea. In fact, it tends to overlook a lot of the depth it might have had in its narrative or plot foundation in preference of more entertaining avenues. Instead of really digging into the racial aspects of our leads, the mission of the revolutionaries, or even the idea that Lee and Karen come from two very different economic backgrounds, the film just plays things out in a more exploitative entertaining manner. The entirety of the first act seems there just to cash in the women in prison exploitative concept by jamming in as many scenes of nudity, awkward lesbian characters, and poorly justified injustices as possible. Why do they spend any time with the two warden characters when they are tossed aside at the end of the first act? There are tons of questions left due to this first act that ultimately seems tacked on for the sake of cashing in on the exploitation genre. Even after that, the film rarely rises above just being a fun exploitation film.

I will admit though, the second and third acts are a ton of fun though. While I do criticize the film for lacking the depth and nuance to grab onto the various threads of something bigger that are present in the script, Black Mama, White Mama seemingly knows what kind of film it is and runs with it at this point. Our heroes have to impersonate nuns, they have fight off a would be rapist, and throughout it all they have to outrun a cowboy bounty hunter played with hilarious outrageousness by cult actor Sid Haig. Seriously though, Sid Haig’s outlandish villain owns every scene he’s in. The film even takes a random detour to have him go check in on a client that results in a sequence that makes no sense, but remains fascinating due to his on screen presence. He steals so many scenes and makes for a much better villain than the rest of the generic villains that it’s hard not to feel disappointed he isn’t in the film more. He deserves to be for his humorous abilities.

As for this version, Black Mama, White Mama looks impressive in its newly released on home video high definition form and the special features are a lot of fun. The new interviews are a delight to watch, Markov is charming as ever still and Sid Haig talking about his time in the Philippines is hilarious enough on its own merit, and they do add a lot of character to a film that might be a bit scarce on its own. For fans of the genre or those die hard Pam Grier enthusiasts out there, this release of Black Mama, White Mama is definitely worth the purchase. The film may not sell to those more skeptical of the idea or those not quite into the trashy cinema that it represents, but if you’re looking for a fun and entertaining film it’s hard to go wrong with this release.

Written By  Matt Reifschneider
Posted by DarkReif at 8:27 PM