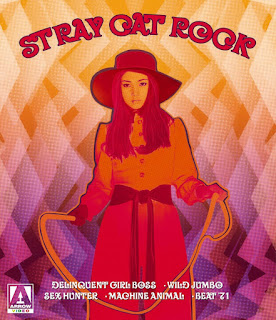 Thanks to companies like Arrow Video, a whole new generation can be introduced to films that are probably best understood by a completely separate generation. In the case of the Stray Cat Rock series, the first film and focus of this review Delinquent Girl Boss, there is a sense that the film is a slice of life and a capsule of time. It’s not always a good thing, mind you, and while Delinquent Girl Boss is certainly entertaining in its own ways, it definitely feels dated and the themes and stylistic approaches seem to be lost in the decades since its release. More or less, despite the wonderful release that this franchise received, this is about as cult as films get and you are either going to love what it has to offer or it's going to seem like an exercise in futility…unfortunately, I feel as though I fall more into the latter than the former.

When a rebel biker Ako (Akiko Wada) stumbles upon a boiling feud between rival young girl gangs, she decides to offer her help to settle things one way or another. The leader of the gang she helps, Mei (Meiko Kaji), is also in a bit of a hard spot as her boyfriend is trying to get in with a group of gangster like business men which is looking to spill over into the streets. Together can Mei and Ako stop the bloodshed or is the inevitable clash going to leave them stone cold dead?

On one level, Delinquent Girl Boss is still a rather entertaining film. It’s very eclectic by nature as it forcefully tries to mash together a variety of different styles of movies including, but not limited to, a biker gang flick, a youth gone wild coming of age film, a boxing movie, and a music video. Director Hansebe, whom was notable for delivering two very awesome Japanese new action films that Arrow Video released with Massacre Gun and Retaliation, seems to spend the majority of his time just throwing whatever the hell might appeal to the young generation of the late 60s for this film. Bright colors, random animated portions, and enough “live” music to shake a stick at (there is even a sequence where one of the characters has a musical piece as she sits on the edge of a road), this film is out there. Hinged on some fun performances, including that of a very young Meiko Kaji, the film entertains enough to keep the viewer hooked and its eclectic nature is almost fun to watch as you try to guess what weird shift of tone or story angle is going to come up next.

While this odd approach to its narrative and hodge podge of genres occasionally works, most of it doesn’t and it’s hard to find the ebb and flow to get into the film and buy what we are being sold as a story. It’s just simply too off beat for its own good at times. There are too many characters and the tone can almost viciously spin at the turn of a word. An interesting addition about a boxing match that’s rigged comes off as pure plot progression to get the baddies all pissy and there is even a moment that slides into a mean spirited torture scene that seemingly comes out of the blue. The film doesn’t spend quite enough time really giving the protagonists a foundation and the girl gang aspect seems gimmicky at best to appeal to a young and rambunctious 60s audience.

All in all, I really wanted to enjoy the odd mixture of style and off beat approaches of Delinquent Girl Boss, but the film just felt too busy, too awkward, and too skittish for its own good. As I mentioned, there is a cult like appeal to just how unbelievably 60s retro this film is and it exists as a scrap book of sorts for the era that it was released. In that sense, for those interested then this film certainly has appeal in its vintage focus. As a legitimate film though, the first picture of the Stray Cat Rock series is less than effective as a story and much more concerned with its now somewhat dated style choices. To each their own though.

Now I’m just curious at how odd the rest of this series is going to be.