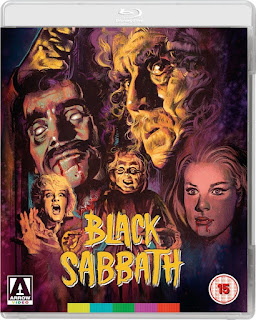 The horror anthology is a kind of film that has been around for years and in the last decade it has seen a renewal of energy. Enough so that there are some fairly strong established franchises around the idea like V/H/S and ABCs of Death. However, most of anthologies in the last five decades still pale in comparison to the Mario Bava classic, Black Sabbath. It’s amazing to think that it has been over 50 years since the release of this trifecta of terror tales because the film has some stunning material and it showcases a director who is simply a natural at crafting tension and spooks over three different kinds of scripts. It’s not quite a perfect film, but it’s still a striking film that works some serious Italian horror magic into its stories to remain an impactful watch today.

Instead of doing the normal Blood Brothers style review of looking at the film as a whole while just pointing out the details from specific moments from various portions, I wanted to approach this review in a different manner by looking at each story in Black Sabbath. While many newer anthologies tend to try and thread the stories together or make them interconnected, Black Sabbath is simply three short tales that happen to have an intro and an outro told by Boris Karloff as himself. Truthfully, the intro and outro, while necessary to give a kick off and a closure, is a bit awkward as Karloff makes jokes and almost pokes fun at the idea of the entire thing being a movie. It’s fine, but it’s easily the hardest portion to appreciate. Hell, in the American version they completely edit out the outro. The intro and outro are very brief though and it doesn’t take long for Black Sabbath to kick right into the stories.

*As a side note, this review is dedicated overall to the Italian version of the film, which has the various stories in a different order from the American cut, but I will try and mention some of the differences if it makes a shift in quality. If you want a cool side by side comparison, there is a nifty little documentary/feature on the Arrow Video Blu Ray that does exactly that and showcases damn near every difference between the two with side by side video and audio. I ended up watching the two versions back to back for this review before discovering that this neat little feature would have done it all for me. Arrow had me covered and I didn’t even know!*

THE TELEPHONE (3/5): The Italian version of Black Sabbath starts off with this story and, oddly enough, it’s easily the weakest one. This is also the story that seems to differ the greatest between versions, more on that in second, but neither version is great. The Italian version is more akin to the giallo concept as a young woman is tortured via her phone by a voice from the past, Frank, who threatens to kill her and whatnot. The performances here are solid enough to be believable and Bava does a remarkable job at keeping the short tale interesting without making a lot of the dialogue sound explanatory to why things are happening. Depending on what version you are watching, the tone of the story is very different with the American cut having a very stark supernatural element to the story and the Italian one being more of a thriller in tone. Both versions are littered with plot holes and each version has its own unique plot problems, but in the end I have to say that the Italian version is a bit stronger as the supernatural elements actually detract from some of the more interesting character interactions. Solid, but hardly exceptional in either form.

THE WURDALAK (4/5): Mario Bava struck a chord with audiences with his previous film Black Sunday (read our review HERE) and its period piece horrors, so it’s not unusual to see him follow it up with a similar tone and look for at least one of the stories in Black Sabbath. While “The Wurdalak” has plenty of very impressive qualities to it, including a horrifying performance by Boris Karloff as the grandfather to a family terrorized by vampires who only feed on the blood of those they love, it’s also a film that feels like it needed to be a full length film to really dig into the intriguing themes and character work that’s present. The romantic subplot between our main protagonist and Sdenka (what a name…) seems a bit rushed and the tension that’s built around the paranoia of wondering who in the family might be a wurdalak could have been heartbreaking. Still, Bava nails this story with his iconic gothic visuals and mystery like tone to the first half of its play time. A particular moment where a young child seemingly wails with the wind is a striking moment and one of the best moments that the entirety of Black Sabbath has to offer.

THE DROP OF WATER (4.5/5): Say what you will, but as far as I’m concerned “The Drop of Water” is the best story in Black Sabbath. While “The Wurdalak” utilizes more complex plotting and “The Telephone” more complex characters, “The Drop of Water” strips a lot of that for the sake of a juxtaposed nuance of subtle character beats and even more heightened visuals. Like the other two stories, this one is sold mostly by its atmosphere and Bava’s patented visuals (to this day I’m not sure any other director quite has the brilliant use of lighting that Bava uses). The story is very simple as a nurse seemingly pisses off a deceased spiritual communicator by stealing her ring and then has to deal with the subsequent haunting. The American version is a bit too bombastic with its score and uses the sound effects to less effect, but the dialogue makes the nurse seem a bit nicer which in a way actually adds to the theme of guilt. So take your pick on which one you want to see first. Both versions are littered with memorable moments though and the face of the dead woman is one that burns into your memory with its contorted grin. “The Drop of Water” is terrifying for such a short story and it really caps off the whole film nicely.

Even with a bit of variance in quality between the three stories, Black Sabbath remains a strong film overall that’s carried by solid performances and Mario Bava’s unique blend of quirky visuals and deep, smoky atmosphere. While Bava would later go on to prove just how well his style would translate through a variety of genres, it’s impressive that he keeps a fairly even tone through three diverse spins on horror during this film. Outside of a few nitpicky plot hole issues, condensing stories, and an odd sense of humor with the intro and outro, Black Sabbath still remains as one of the best horror anthology films in existence and laying the groundwork for plenty of films to come.

Written By  Matt Reifschneider
Posted by DarkReif at 2:44 PM