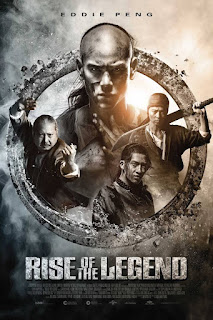 The character of Wong Fei Hung has seen a lot of different eras and stories in Hong Kong cinema. He’s been both side and lead characters and he’s been portrayed by some of the scene’s biggest stars like Jet Li and the like. So it’s not wholly surprising that as the Chinese film market starts getting bigger and bigger they would attempt to reboot the character for a new franchise. This is where Rise of the Legend comes into play. The film attempts to blend modern style and narrative with classic kung fu elements all the while establishing a new spin on a classic character for a whole new generation. The results are more mixed than one would hope, but the ideas are there and Rise of the Legend remains a fun movie and an intriguing way for a new generation to be introduced to the character. If only the film was a bit better, it would be easy to call this a fantastic reboot. As is, the film is enjoyable, but hardly the home run it could have been.

Fei (Eddie Peng) is a rising name in the Black Tiger gang that is vying for control of an international pier. His kung fu is damn near unbeatable and his quest to rise in the ranks is unmatched. It’s enough that the Black Tiger boss Lei (Sammo Hung) has taken a lot of notice in his abilities and looks to take him under his wing, much to the dismay of Lei’s three adopted sons who act as generals for the gang. However, Fei has a secret agenda and his rise to power is only the first step in becoming the hero that the people of this seaside town deserve.

The first 25 minutes of Rise of the Legend are ridiculously awesome. I mean, it’s just jaw dropping awesome. The stylistic and modern spin on the classic Golden Harvest inspired fight work of the opening scene, the intercut flash backs to a young Fei and his father, and a slick opening shot that swings into the town without an obvious edits…damn did Rise of the Legend have me hooked. Unfortunately, the next hour and a half has a lot of trouble living up to the promises of this opening sequence. However, it’s one hell of a way to be introduced to the story.


Outside of this awesome rain soaked fight and the world building of a pier being fought over by two rival gangs, Rise of the Legend attempts to be a bit more modern with its approach to the story. Instead of playing up Wong Fei Hung as a straight forward Robin Hood hero, it shifts gears to make the film a much more conspiracy driven noir inspired flick with shifting alliances, Wong Fei Hung undercover, and espionage elements. While the idea is sound, it takes much too long to actually get the film moving. At times, Rise of the Legend attempts to be a sort of spy flick where Fei and his team must figure out how to replicate keys, turn the adopted brothers of the gang against one another, and set up a heist of sorts…all in the second act. It’s too much and it moves so quickly that the audience wants to zone out as it does all of this and still attempts some character building for our lead, the villain, and his team – which also includes a four way love subplot. It’s scattered and muddled in its attempts at creating an epic origin for our hero. There is plenty of sound concepts at play, but it needs like an hour more to really build out the idea and when this film reaches an already long 2+ hours run time it just feels like it’s trying too hard.

Fortunately, Rise of the Legend retains a slick and unique blend of modern style to its plentiful fight sequences. There are moments when the film feels a bit too much like a Matrix knock off with its slow motion and spinning camera tricks (a decade and a half too late), but truly the choreography and screen presence of the fighters on display works to be massively entertaining. Not only is the opening fight inspired and fun, there is a great sword fight at the mid-point that earns some definite respect. It’s somewhat unfortunate that despite its great set up, the finale where our hero must battle the gang leader (played with gusto by Sammo Hung) comes off as a bit underwhelming compared to the previous fight pieces. It’s meant to be more dramatic and less over the top, but it flounders a bit in a film that’s brimming with style.

It’s true that Rise of the Legend fails to live up to its own hype with a hit or miss performance from Eddie Pang and a narrative that’s scattered in focus and, oddly enough, both too long and not long enough, but it’s also a film that succeeds in a lot of fun ways with its style and charisma. It’s not enough to really call it the franchise kick off that it wants to be with its attempts at deep dramatic origins for the character. However, go in with the right mind set to have fun with the movie and appreciate it for its style and you’ll be fine. It still comes with a recommendation, but a heavily footnoted one.