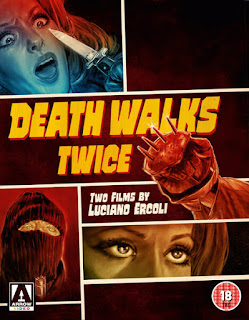 After watching the latest release of Death Walks on High Heels, contained in the same box set as this film, I was stoked to dig into Death Walks at Midnight. If it was even half as clever and artistic as a giallo as the former, then this film was going to be impressive too. Fortunately, Death Walks at Midnight is a pretty effective little murder thriller, despite not being quite as good as High Heels, and the combination of actors, director, and writer proves to work effectively once again. The first half of the film is a bit rough when it comes to flow and narrative distinction, but by the time that Midnight hits full stride with its death walk it’s a vicious and shocking crime film worthy of the praise it receives. It might be a film that’s somewhat saved by the third act, but it’s a miraculous save that redeems a lot of the awkward set pieces from the first two acts.

Model Valentina (Scott) volunteers to help her journalist friend Gio (Andreu) with a photo shoot while under hallucinogenic drugs, but while under the influence she has visions of a man in sunglasses who kills a young woman with a spiked glove. The story runs big, but she finds herself in hot water for it, all the while she begins to believe what she saw was real and that the killer is coming for her…

In my review for Death Walks on High Heels (a review you can read HERE), I wrote about how that  film is a tale of two halves – the first half setting up the thrills of the second. If anything, the writing from famed Italian writer Gastaldi on Death Walks at Midnight might be a more extreme version of this same idea. The film is a bit more cohesive overall in tone, moving away from the obvious set ups and pay offs, but the first two thirds of this film do feel a bit scattered in their narrative. After a potentially intriguing set up with drug induced murder witnessing and a strange sort of love triangle between our heroine, played once again with screen devouring charm by Susan Scott, and two very different men, the film seemingly meanders through its narrative. Leaping between characters, adding in a lot of seemingly unfocused subplots (including a scene where Valentina hitches a ride with a ridiculously well prepared rapist), and even dropping some of the more intriguing elements like whether or not there is a supernatural piece with her visions while on drugs, I was somewhat disappointed with how Midnight was rolling. It’s saved by a lot of great performances, including Simon Andreu who oozes the on screen charisma with ease, and the direction of Ercoli with his artful use of landscapes as sets, but it stumbles a little bit as it plays out.

Then a miracle happens. Writer Gastaldi pulls out one of the strangest and most effective giallo turn around twists I’ve seen thus far while newly exploring the genre. He takes a plethora of various subplots and actually makes them work as one whole story. While I should have expected as much considering how Death Walks in High Heels played out, Midnight works them all together with an almost dancer like finesse and then it sprints with it at full speed. The final act ties it all together and at the same time crafts an invigorating and rather viciously tense ending. Not to give too much away, but at this point the film almost veers from giallo into Eurocrime territory punctuated with a rooftop chase sequence and some serious brawling. Not only does the writing pull a magical knot out of all the various plotting, but it tops it off with some entertaining action. If there is any film that is saved by its third act in some surprising ways, it’s Death Walks at Midnight.

Still, the first two acts can be a bit unfocused and the rather fascinating move of tossing the drug induced visions after the initial kick off make for a film that’s not quite as good as the other Ercoli giallo that’s included in this Death Walks Twice box set. For all of its oddities, the fantastic third act of this film solves a lot of the plot holes that seemed gaping at first and while it can be a bit off beat for its own narrative good, I have to give Death Walks at Midnight a big recommendation if only to see the magic that Ercoli and Gastaldi pull off with the tone and writing shifts at the end. Not only that, but this release is jam packed with fun interviews and other special content that really deepens the experience of watching these films – notable for most collectors or even to those newer to the giallo genre like myself.

Now I’m off to purchase a copy of Forbidden Photos of a Lady Above Suspicion so I can finalize this loosely knit trilogy of giallo.