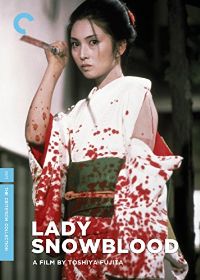 Occasionally, there are films that will grow with you over time. In many ways, a great film is one that strengthens with time and overcomes the bane of its own time context to reach a universal state. Lady Snowblood is one of these films that only gets better with time, in overall context and for me personally, which is something that not many films can say. There was always a knack for the Japanese cinema to produce these kinds of films including the likes of Lone Wolf and Cub, the Zatoichi franchise, and other iconic exploitation films of the yakuza genre, but Lady Snowblood might be one of the most interesting ones. On the surface, the film is often eclectic and abrasive – thanks to a leaping narrative and stylized approach – but with repeated viewings it opens up its many layers of detailing, symbolism, and intense off beat moments. This allows Lady Snowblood to only strengthen with time instead of collapse under its own contextual surroundings.

Lady Snowblood (Meiko Kaji) has spent the entirety of her life preparing for her birthright. To kill the four people responsible for the death of her father and the imprisonment of her mother who died in childbirth. Trained as an expert swordswoman, her biggest challenge is just finding the four criminals and she will need help in doing just that, but is it enough to accomplish such a daunting task?

In the 70s, many of the sword toting hero/anti-hero films were beginning to really experiment. In the case of Lady Snowblood, which is based on a manga, the film really adapts the style of the source material in some unique ways. It retains the somewhat episodic structure as our heroine moves from one person of interest to the next and it isn’t afraid to take a leaping nature to its narrative within that, jumping back and forth between flashbacks and the present situation to give the film a dynamic nature. No wonder Tarantino steals so much of his material from this film because it’s really effective at doing it. Prepare to sit back though, the film can be a bit bumpy in how it will suddenly jar from one scene to the next and even leaps in time from Snowblood’s birth, to a bit of her training as a child, and then her current mission to slay a handful of folks that wronged her family. On my first watch, I wasn’t quite sold on this stuttering narrative and why it spends so much time focusing on the events surrounding the birth of Snowblood versus her actual plight to kill her targets . Further viewings showcase just how the film balls up this idea of how the past haunts the present and reflects itself time and time again. A subtle and fascinating performance from Meiko Kaji pushes this idea further by adding in some brilliant subtext to the role of destiny and the cyclical nature of violence. There is even a secondary character, the daughter of one of Snowblood’s targets, who becomes a sort of soft reflection of this concept and it plays out in such a smooth manner that I missed it in previous viewings. This allows the structure to create subtle parallels of theme and it works in brilliant ways.

From there, director Fujita applies a lot of great execution to the film to finish off the strong writing and thematic elements. As mentioned, Meiko Kaji and her iconic glare make for the perfect muse as the slighted woman whose will power is something to be feared, but the entirety of the cast is strong considering the limited time that they have on screen as it moves from one target to the next. The various villains are remarkably different and each one represents a nice new challenge (and lesson) for our heroine to approach. The biggest issue that arises in the film is the odd addition of a romantic subplot that seems a bit rushed over when Snowblood thinks her task has been accomplished and settles down with a writer who helped her in one of her previous expeditions. The idea is sound and the performances work for what is shown, but it felt like it needed another 15 minutes to really make the finale as impactful as it might have been when a few of the final twists are revealed. It’s not a huge issue, but one that could have added even more punch to an already punchy film.

Visually speaking, Lady Snowblood is also iconic in a lot of ways. The blood red snow of the title sequence becomes a repeated theme as the snowy setting is brought back for Snowblood’s first kill onscreen and then again in the finale which adds a slick tone of symbolism that the audience can interpret depending on their own take of the events of the film. There is stark contrasting lighting of the birthing sequence and there are times when the film reflects the work of painting with how the depth and color beats work within the film. Even when the violence occurs, the bright red 70s style blood that splatters on the shiny snow, it showcases the best of when arthouse meets grindhouse in style. Once again director Fujita seems intent on making each frame work as its own story and it only deepens the experience of Lady Snowblood from that of an entertaining story to one of artful approach.

For a film that was essentially a low budget affair, Lady Snowblood is the kind of inspired film making that not only rises above the context of its time, but it damn near hits a universal experience. It’s thoughtful and artful, but retains a lot of grindhouse-esque aspects to its violence and quirks that allow it to be viciously entertaining at the same time. The combination of director Fujita and Kaji kicks the film into next echelon territory and when they are working with a script that’s both subtle and grand, it makes for an unforgettable film experience.

Written By Matt Reifschneider
Posted by DarkReif at 3:35 PM