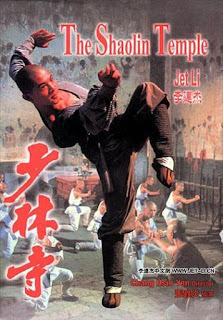 Perhaps it’s just the circles of influence that I frequent or I have seemingly missed the memo, but The Shaolin Temple is fuckin’ fantastic and no one told me this. In the grander scheme of things, the film might be easy to overlook due to its many similarities to the legendary 36th Chamber of Shaolin (more on that in a minute), but I was impressed almost immediately with the strength of the film’s story and its insightful execution on screen. There are a few nitpicky things that I have against the film, but overall The Shaolin Temple was a massive delight that took the basic concepts of classic kung fu film and added a lot of heart and thematic strength to it. It’s unfortunate that it’s not spoken about more, even if it’s just in the martial arts spheres that I visit. It’s worth the watch.

When a young man’s (Jet Li) life is torn apart and his father killed by a vicious government, he flees for his life and finds shelter in a Shaolin temple. There, the monks nurse him back to health and he is taken under the wing of one of the kung fu masters there to become a monk. However, he can’t let go of the injustice he witnessed and when the same villains start threatening the Shaolin temple – he will take matters into his own hand and hope that the monks will follow.

On the surface, The Shaolin Temple (not to be confused with Shaolin Temple directed by Chang Cheh from the decade prior) is essentially a 36th Chamber of Shaolin reproduction. The idea of a slighted young man retreating to Shaolin to learn kung fu so that he might return to and bring justice might be one of the more replicated stories told. Unfortunately, The Shaolin Temple isn’t quite as effectively made and told as 36th Chamber is and, in retrospect, sort of lives in the shadow of one of the greatest martial arts movies ever made. However, don’t let those comparisons detract you…The Shaolin Temple is still a fantastic story wrapped in some very effective film making. Director Chang Hsin Yen nails a lot of the main beats of the film including the flow of narrative, despite some of its trickier time jumps and pacing tangles in getting the film moving with its period piece placement. Occasionally I wanted more from some of the relationship building elements (the father/son aspects for our hero tend to be brushed over a bit much for my tastes), but it’s only because the characters are all so much fun and effective that I wanted more and it doesn’t necessarily detract from the film as a whole.

There are two aspects to the rest of the film that stand out immediately in The Shaolin Temple: Jet Li and the settings. This film was one of the first movies to really use mainland China as a back drop and while the gimmicky bookends of “being based on a true story” and explaining to the audience about Shaolin with a cheesy narrator and a song might seem eye-rolling at first, it establishes the setting and gives the film a back bone of realism that not many kung fu movies attempt to grab at. The rest of the film is dynamically back dropped by massive temples, rolling hills, beautiful waterfalls, and some other iconic Chinese topography. Sure, in the end the setting is simply that – a setting for the guts of a film, it gives The Shaolin Temple an almost instantly memorable canvas to paint itself on.

The other iconic piece of this film is a young Jet Li in the main role. While Li does occasionally struggle with the more emotional beats of the film, including some attempts to portray the complex emotions of losing not only his father, but his master, he wins over the audience with impeccable charm and some striking screen presence. His youthful energy compliments a lot of the charisma needed to sell some of the secondary relationships of the film, like a romantic subplot featuring the daughter of his master, and it’s endearing to see a young Jet Li give it all in his debut film.

It also helps that Jet Li is perfectly utilized in the fight work of the film. Li’s sharp movements and almost unbounded skill sets are all shown in full with his repeated fight sequences and diverse choreography to match. As the character’s skill sets increase, so do the complexity of the fight sequences, but it’s hinged on a fantastic one-on-one battle where Li’s hero must use drunken staff fighting to counter the villain’s drunken sword at the mid-point of the film. The finale has a lot of emotional punch for the action (which works stunningly well), but this mid film fight is damn near iconic and it’s a blast to watch. All of the fight work is impressive, but there are some instantly unforgettable moments that ought to be praised for its speed, complexity, and execution.

The Shaolin Temple blew me away. Perhaps it’s because it tends to be a bit overlooked by fans and its release on home video has been mediocre at best (thanks goes to Netflix Streaming who picked it up), but the film deserves more praise, more glitz, and more love from fans for its impressive pieces. It’s seeing films like The Shaolin Temple that makes me wonder what other iconic martial arts films exist out there that seem buried to those who have no ways to dig into the robust genre. If they are anything like the quality of film present here, then there is a gold mine awaiting to be found.