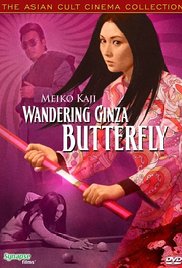 Wandering Ginza Butterfly had me excited. Just the idea of combining the onscreen presence and talents of Meiko Kaji with the director of Sister Street Fighter and Karate Bull Fighter screamed awesome. It could have been a match made in heaven. Could have. Wandering Ginza Butterfly is not nearly as exciting or awesome as I thought it would be. The film is not necessarily bad and in many ways the story is one ripe with some interesting social commentary and some fun performances. However, the film is also super scattered in its approach to its narrative and it feels uneven in a lot of ways because of it. It’s almost like the film was a bit unsure of what genre it wanted to be and so it just took turns leaping from one genre to the next. It’s easy to see why it has the cult following it does, but it’s also a film that pales in comparison to what it might have been or even to any other films in the filmographies of Kaji or director Kazuhiko Yamaguchi

For Nami (Meiko Kaji), her time spent in prison has set her straight on a lot of things. She is remorseful about her past life and means to set things straight when she’s released. Back in her home town of Ginza though, things are a bit rough and the friends she makes after her release are running into trouble with the local yakuza who mean to control the businesses no matter who they have to cross and kill.

In a lot of ways, Wandering Ginza Butterfly is a an interesting evolution on the Stray Cat Rock characters that Kaji played in her early career and the various revenge films she would do later on like Female Prisoner #701: Scorpion and Lady Snowblood. After killing a man while running with a girl gang, Kaji’s Nami desperately seeks redemption only to find the world that she lives in is less than forgiving when it comes to her past and how her future will end up. The themes and concept are solid in the film and Kaji once again carries much of the film and unlike many of the other iconic characters she plays, she comes off as a very sympathetic and charming lead for the audience to connect with. It’s not quite enough to sell the rest of the film though as it jumps through genre hoops to get to its logical conclusion. It starts off with a prison scene, it moves into a more dramatic yakuza style set up, adds in some comedic scenes when Nami starts helping to collect money for the bar she works at, goes into an oddly placed (but remarkably tense and well shot) game of billiards that ends the second act, and then goes full on yakuza action for the last act. Despite some fun moments, it feels unfocused and the narrative spins out as the themes and characters become muddled from the different tropes approached. By the time it gets to the action set piece at the end (which randomly features Kaji in a kimono for no fuckin’ good reason) it lacks a lot of the emotional hook to sell it as impactful. It’s unfortunate.

To the film’s benefit, all of the performances here are solid to help the viewer out in the narrative eclecticism. Oddly enough, Meiko Kaji might actually be out-screen-pressenced by one of her co-stars Tsunehiko Watase as her newly found friend and occasional comic relief who helps  her out with finding work and getting her acclimated to the civilian life. There are moments where a lot of other actors and actresses almost do the same with their fun and intriguing characters that populate the film. If anything, it’s the performances and characters that add to the cult appeal of this film and outlast its dramatic plot and stumbling narrative.

Wandering Ginza Butterfly is a film with tons of potential and a mediocre script to build it on. There are a plethora of great characters to follow, the direction can be impressive in some of the weirder moments (including that off the wall billiards scene), and Meiko Kaji and her co-star Watase damn near carry the film. It’s too bad that the movie just can’t seem to find a balance to all of its genre beats and a flow to its narrative. It undermines a lot of the great things about it. Still, Wandering Ginza Butterfly is a fun cult film worthy of fans with enough charm to work…even if it never excels.