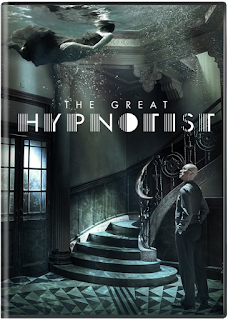 When it comes to Chinese filmmaking, whether it is from Hong Kong or not, I rarely think of the country as one that can power through with some thoughtful science fiction embracing, mind bending films. Cheesy action, occasional goofy comedy, sure, but never the kind of thriller that The Great Hypnotist represents. Truthfully, I did not have horribly high expectations for the film due to this assumption and perhaps that kind of lowered viewpoint made the viewing so surprisingly pleasant, but The Great Hypnotist takes the kind of effective thriller elements of Shutter Island and the character blurring aspects of Eternal Sunshine of the Spotless Mind and crafts a pretty effective little movie. One that’s not quite perfect, but will probably go down as one of the better overlooked gems released in the United States this year.

Xu Ruining (Xu Zheng) is one of the big names in psychiatry that uses hypnosis to help his patients. When one of his friends comes to him with an extreme case, a woman (Karen Mok) who supposedly sees dead people, he’s going to have to use every trick up his sleeve to dig to the bottom. However, she might be hiding more than he knows.

Actor Xu Zheng is mostly known for his comedic roles and, to be honest outside of seeing him play the dramatic roles in comedy films like Lost in Thailand and Lost in Hong Kong, I always kind of assumed the guy mostly did comedies. So imagine my surprise when this film had almost no comedic aspects to it and instead focused down on creating a viscus formula of reality blurring thriller. The Great Hypnotist is ambitious, if anything, and there are a lot of great elements to get it to hook its audience – including an impressive performance from Xu Zheng and Karen Mok. A ton of this film hinders on their roles and performances. Co-star Karen Mok who seemingly keeps stride with Xu Zheng in a lot more subtle ways than his more diverse character arc and in this sense The Great Hypnotist succeeds. With what the script gives them, they both nail it and create a fascinating onscreen chemistry that works to keep things tense as a battle of character wills plays out. While the complex story and visuals are certainly the more obvious hooks for this film, I think their performances are truly the crux that gives The Great Hypnotist the human element needed to work.

This, of course, brings us to the pieces I just mentioned – the visuals and story – that give the film its distinctive style as a thriller. As mentioned above, many times, The Great Hypnotist goes for the unstable narrative approach to its tale as it spins both of the main characters as people with somewhat untrustworthy approaches to the plot. So it’s not unusual that the film loads in a lot of the blurred reality/dreamscape spin where the audience is given pieces of the whole story in little bites and challenges them to figure it out. Truthfully, sometimes it’s a bit too little. The film doesn’t shy away from jumping right in to the hypnotism pieces (with its often nightmarish bending of time and physics in the visuals) but it doesn’t quite give us the robust character building in the beginning needed for the finale to pay off as it might have. The emotional impact is shown with power on screen, but it’s not fully felt due to the film’s intensity of trying to keep things hidden and reality spinning with the gimmick of the blurred lines actually overpowering the impact at times. Some folks may enjoy it, but it’s not perfect.

There were times that I wanted to film to be a bit longer in the first act, to give us a bit more of that emotional attachment to both characters and a few more clues to how the events of the third act will play out, even if the film is already around an hour and forty-five minutes. Some of this is due to the fact that final twist, which I will not spoil because it’s pretty impressive, takes anywhere from around 15 to 20 minutes to just explain to the audience. There are so many twists, turns, and cartwheels of plot that wasn’t shown earlier, that it actually takes that long to explain it to the audience. It works, as I certainly had to pick up my jaw off the floor, but it almost loses a bit of its emotional and dramatic pop as it throws down a lot of new story and character beats as twists. It’s a minor issue as I was still very impressed with the complexity of it all, but just a bit of fine tuning could have made this film an instant must-see classic.

All in all, The Great Hypnotist is still going to end up being one of the overlooked gems of the year since it finally received a US release through Well Go USA. It’s a dense film, worthy of several watches, and the execution of the visuals and performances is through the roof in excellent quality. Some fine tuning of the first act however could have made it a perfect thriller and that’s really the only issue that arose during my viewing of the film. As mentioned above, fans of films like Shutter Island and Eternal Sunshine should most definitely dig up this film and give it a gander – it sits right up there with those films in quality and style.