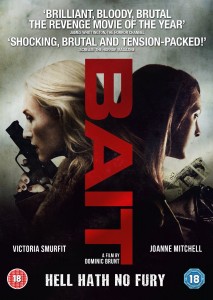 Being only one of three films I chose at Fantasia this year that you wouldn’t e able to file under the horror gene, The Taking (also known as Bait), was a film where I was looking for something different. Director Dominic Brunt, whose only feature before this is a zombie flick, directs this film that analyzes the two lead’s nightmare and does a pretty decent job. The terror comes from situation and Brunt puts our leads in as they find everything that they own or love at stake including significant others, family, and their own lives. This little film isn’t one that Fantasia fans have heard much from and it is was placed to the smaller venue, but to still a sold out crowd of curious genre lovers and while The Taking did not garner a yelling crowd, it was definitely well received.

The Taking follows cafe shop owners Dawn and Bex (played by Joane Mitchell and Victoria Smurfit respectively) who are looking to expand their business from outside the local market to their own little shop. After failing to acquire the necessary loan to open their business from the bank, Dawn decides to hear out an offer from Jeremy (played by Jonathan Slinger) a new acquaintance who tries to befriend the discouraged twosome. Up to the point that they finally feel tricked and decide to decline the money, it is already too late. The events giving clues to Jeremy’s identity up to this point give answer as Dawn and Bex get involved in a do or die situation as Jeremy is looking to collect.

This little film from the UK was not overly delightful considering a few bones that I had to pick with the writing. While I have no problem with the cast’s performance, especially Jonathan Slinger who plays his role to a tee, the decisions made by our leads are more than questionable. I felt like I was watching a slasher film where everyone decides to split up! As a viewer I was putting myself in their shoes and making my own decisions. This isn’t solely for the two protagonists (though the film seems to focus more on Dawn) but for Jeremy as well. As a matter of fact, his were a lot more frustrating! I can acknowledge that The Taking’s writer Paul Roundell had chosen this because it was a simpler route than to have to think. If Jeremy is a dangerous man approaching his victims looking to collect, shouldn’t he be used to them trying to trick him or trying to kill him instead? Would it be easier to make excuses like this? It seems to me that it’s more like an excuse to not think. The characters are interesting enough and have more depth than your average film. Bex usually doesn’t take shit from anyone and is happy with her boyfriend, while Dawn is in touch with her mother and her autistic son. Where the pay off really comes is the film’s climax and in spades. It seems only natural that after the large but not gratuitous amount of violence in the film that it finishes off with a big bang. After taking a ridiculous amount of mental and physical abuse, our leads decide that they’re not going to take anymore shit from Jeremy and his goon.

I think the best way to view The Taking is not seriously like I did because then you just start pulling your hair out. If you decide to do otherwise, then it’s some pretty decent popcorn fun. I may have exaggerated the issue of some of the less than smart decisions that the characters take but there are a few laughs to be had and the end resulted in the biggest reaction from the Fantasia audience and it was definitely a positive one. Seeing the villain get his just desserts is super satisfying. The Taking lays in the middle of the spectrum of a film that definitely deserves the Netflix viewing or rental but not exactly the full purchase price.

Elise Holmes is not your average writer. Dedicated to her Evil Dead fan site The Deadite Slayer, she is doing Fantasia Fest coverage this year for Blood Brothers! Check out her site HERE!
Posted by DarkReif at 9:48 PM