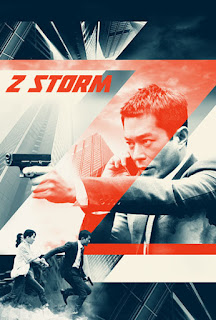 A crime thriller starring the fantastic Louis “I’m in everything” Koo about corporate espionage with that stunningly awesome cover artwork from Well Go USA for the US release of the film? On paper, Z Storm seems to be a rip roaring, tense thriller. In reality, the film is a baffling series of massive misfires. There is the core for something intense in the foundations of Z Storm, but lackluster execution of the idea (in a lot of ways) makes it a film that is going to ring out as a massive disappointment long after the actual film has ended. If anything, Z Storm is the perfect storm of to rain disappointment on its unsuspecting audience.

Officer Luk (Louis Koo) has his hands full as a lead ICAC investigator. Accusations against a police superintendent are being handled delicately, but it’s just the tip of the iceberg. With each twist, he and his team come closer and closer to uncovering a massive corporate conspiracy that reaches into the government. Can he stop it in time before the perfect storm is created?

What starts off as a corrupt cop flick quickly converts to a full on corporate espionage film that attempts to create a winding road of plot twists and conspiracy theories for its audience. As was mentioned above, on paper the film could have been an effective little thriller – rarely unique, but effective. In fact, there are many moments that feel like they are almost there in the film. It’s just wholly unfortunate that Z Storm feels like an amateur TV movie that doesn’t utilize any of its concept to full potential.

When I say that it feels like a TV movie, I most certainly mean it. The look of the film, in production values and from director David Lam, looks like it was trying to appeal to the Law & Order fan base rather than the thriller fans it should have. The editing is awkward with ridiculous swipes and fuzzy fade ins and outs, the music is eye-rolling cheesy, and outside of some of the stock footage of the city, the visual style of the film lacks an artistic touch. It even goes as far as force feeding random fast forward and slow motion moments to “spice things up” in all of the most irritating ways. Each time the film cut to a fast forward shot of the city, queued terrible music, and told us how many days were left until the deadline of the film’s finale I wanted to throw something at the television. And this was just one of the reoccurring instances of these poorly chosen moments.

To make things even worse, the principal cast desperately act their asses off to try and make this film work. Louis Koo, who is essentially awesome in everything he does, is perhaps the biggest saving grace in Z Storm. Even when a flashback moment about his wife is ruined by terrible CGI and cheesy as hell music, he damn near makes it all work with his acting. This goes for a lot of the main players, particularly the ICAC team that are the core protagonists of the film. They’re cliché and often generic, but the cast works it as best as they can to sell those characters. I also have to give a particular nod to Michael Wong as the villainous counterpart to Louis Koo – whose charm and arrogance is a perfect balance to Koo’s intensity. It’s just too bad that this is the movie that they would play counterparts in and not something more akin to Drug War or Wild City.

For those looking for a great crime thriller, be advised that Z Storm is not everything it should have been. It is light on true suspense (even the action sequence at the end seems depressingly ineffective for the one action set piece we get) and the TV movie look of the film undermines any of the great elements of its script that might have worked as a selling point. To put it blunt, Z Storm is boring. Z Storm looks cheap. Z Storm is a disappointment. Unless you’re that die hard Louis Koo fan (or love it for its ridiculously awesome cover artwork) it’s hard for me to recommend this film and I would suggest rewatching Drug War again instead.