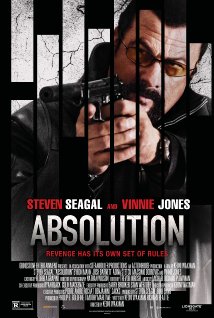 While there has been a resurgence in the careers of many of the 80s and early 90s action icons, the continued career of Steven Seagal is rather perplexing. Unlike his peers Jean-Claude Van Damme, Gary Daniels, and even Sylvester Stallone, Seagal still doesn’t seem to give two shits about the movies he is in. If it wasn’t for the frequent collaboration with director Keoni Waxman (and a slew of strong supporting cast members), Seagal’s career would be bottom of the barrel material. Take his latest effort, Absolution, as a prime example. A sequel to his film A Good Man from last year, Absolution is a decent B-grade actioner that’s utterly drowned by Steven Seagal presence. It’s almost sad that one of my favorite action stars from the early 90s would be the worst part of his own films.

John Alexander (Seagal) continues to work as a hired hit man in the underground world of crime and corruption. He’s turned a new leaf though and decides he needs to atone for the sins in his life. While on a job, he encounters a young woman on the run from a vicious local crime boss (Jones). With the help of his ass kicking partner Chi (Mann), Alexander is going to have to rely on his wits and his fists to find his absolution…or die trying.

To be upfront, Absolution is still a shockingly fun straight to home video action flick. Keoni Waxman is proving to be one of the best directors in the world of low budget action and he only continues to get better with time. Waxman also serves as one of the writers on the film and despite some very predictable plot progressions and the inclusion of a random Russian side character (whom only serves to be a walking, talking plot progression himself), the film carries a lot of energy and heart to sell its simplified tale of anti-heroes vs baddies in an Eastern European country. Absolution isn’t one of the best films you’re likely to see this year, but considering is budget and B-grade concept it comes off as a pleasant surprise in quality.

It helps that the action here is solid with plenty of shoot outs (try to ignore the CGI bullet holes though) and plenty of slick hand to hand combat thanks to the charming and dynamic presence of the underrated Byron Mann. Even Vinnie Jones, whom I expected to show up for a paycheck as the big bad, has a decently shot and fun fight sequence against Seagal in the final act. Don’t think about some of the elements too hard though (like the lacking security of the bad guys, the terrible shooting by the henchmen, or the weird inability of the villains to catch up to Seagal who never goes faster than an awkward saunter) and you’ll be just fine as you ride along with the film.


Yet, despite all the surprisingly fun and energetic things that Absolution has going for it, the one key to making it all work is Seagal and…well, he’s straight up fucking terrible in this film. Steven Seagal is single handedly the worst part about his own movie. He delivers key lines like he’s drunk, he has no chemistry with any of his supporting cast (although Byron Mann obviously tries to compensate with his own larger than life screen presence), and Keoni Waxman has to edit around Seagal’s action scenes to make stand ins look real and to make him look more badass than he is anymore. Throughout the film I kept thinking to myself, “Gosh, I sure wish Gary Daniels was in this film. It would be so much better.” While I appreciate that Seagal is still making films and that those films are decent at their foundations, it would make me feel much better if it looked like he gave two shits about it.

In the end, Absolution is a surprisingly solid little film that is completely undermined by lackluster performance of its star. The action is fun, the supporting cast does their best (although the main girl in it makes me wince whenever she speaks in it), and Keoni Waxman takes a patchy script and makes it worth watching. If only someone else was in the film instead of Seagal, then Absolution might have been one of the bigger surprises of the year.