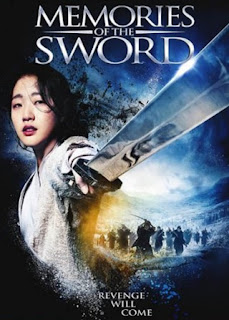 South Korea has already established themselves as the elite place for thrillers, but the market has showcased a knack for plenty of other genres too – including the Hong Kong style of wuxia. Last year’s Kundo was a big surprise in its wuxia influence (enough so that it ended up making my top list of action flicks for the year), but it’s the epic tale of revenge in Memories of the Sword that has the style down damn near perfectly. Featuring some breathtaking visuals, classic wuxia storytelling, and performances to emotionally devastate the viewer, Memories of the Sword is a wickedly effective ride that blends a variety of old school influences with a modern sense of style.

A young woman (Kim Go-eun) has spent her whole life training under his blind mother (Jeon Do-yeon) to become an expert fighter. Her mission: to kill the two people that slaughtered her mother and father during a failed rebellion. However, when a high ranking general (Lee Byung-hun) sees her fight in one of his contests for locals, he recognizes the style and sets into motion a set of events that will bring two generations together…all swords blazing.

If you take the core concept of Lady Snowblood, wrap it in the epic wuxia style of Yimou Zhang, and then litter it with the modern artistry of The Grandmaster, then you have a general idea of what to expect from Memories of the Sword. As far as plotting and characters go, this film is epic. Running at roughly two hours, there is still not enough time to fully flesh out a lot of the secondary roles (a white haired sword master feels a bit underused and a brief romantic story thread with our young lead seems to be a bit undercooked) and the film flies by as it tries to navigate a story that bridges two generations of characters and features a solid handful of twists. Giving credit where credit is due, the writers and director Park Heung-sik make this film flow with remarkable finesse as it never feels bogged down with story and it’s balanced beautifully with visual storytelling. There is a lot to consume here, but it goes down with ease.

It certainly helps that the cast, all the way down to some of the throw away roles, are performing with full on commitment. Even with a deep and dense plot, the cast sell each moment with impact by utilizing the themes of cyclical revenge, love, and identity as resonating factors to adhere to the audience. In particular, Lee Byung-hun delivers an ambitious performance as the film’s villain that makes him a sad and fascinating character that far too many films are afraid of crafting for their villains. This allows the third act, when a handful of new twists are thrown at the audience, to be as heartbreaking and emotional powerful as possible. Don’t get me wrong, I love the strong female leads of the film who carry the brunt of the emotional arcs for the film, but it’s the ability for Memories of the Sword to make a villain so relatable and layered that truly expresses how well this film works when it comes to characters.

Visually speaking, Memories of the Sword is an intriguing blend of modern artistic merit and classic wuxia elements. Director Park Heung-sik loves to bound between swooping camera shots and long framed pieces, giving the film a bit of a Yimou Zhang feel that’s best compared to the likes of Hero or House of Flying Daggers with its robust color palette and whispering movement of swordplay. This is injected with a big show of slow motion modern play (where my reference to The Grandmaster comes up) and some modern action design. Perhaps the only real issue arises from the director’s ill-advised use of random quick zoom ins and outs during some fight sequences. The young swordswoman’s first fight is a bit hectic in its editing and zooms and it ruins a bit of the dance like artistry of the design. He compensates nicely for it in other action pieces, including a fight between mother and daughter in a field and the snow glazed finale. Although the best piece for this action fan came from a running take as our young heroine does a one woman siege of the villain’s palace in the final act as she slices and dices through a barrage of guards. It’s slick and modern compared to the big wuxia finale that follows it. In the end, it’s a brilliant balance of the two styles.

There are a few nitpicky things that didn’t quite work as well as one would hope, but that’s because the rest of Memories of the Sword works so impressively well. This is the kind of modern wuxia that should make fans of classic Asian cinema excited for the new age of directors and writers. It’s epic in its narrative, the emotions and performances hit every mark, and the visuals are stunningly executed. Memories of the Sword is a gem of a film, shining in its modern craftsmanship and classic in its wuxia design. This film comes with a massive recommendation.