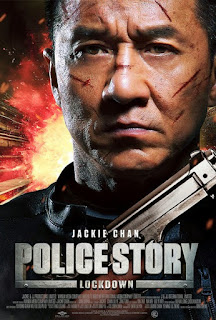 While the Police Story franchise remains one of Jackie Chan’s most notable series, thanks to its blend of charm, action, and dramatic flair, the series has become something of a ‘title only’ sequence of sequels rather than the full on follow-ups that comprised the first four films. New Police Story indicated a new direction for the franchise, one that moved away from the massive stunt spectacles and often charming humor (no matter how dumb) and towards an even more serious blend of thriller and drama. It still featured plenty of the action and silly concepts we’ve come to expect from Jackie’s films, but it definitely evolved the series. The latest entry, Police Story: Lockdown (or as it’s known most places Police Story 2013) fully embraces the darker and more serious elements of the series. With no relation to previous entries, Lockdown is more thriller than action film and the move makes for some intriguing choices – for better and worse.

Zhong Wen (Jackie Chan) just wants to reconcile with his daughter (Jing Tian). So she sets up a meeting for them at one of the new big clubs in town run by her new boyfriend Wu (Liu Ye). Unfortunately, a group of highly trained criminals is about to take down the factory themed club for some hostages. What Zhong Wen doesn’t know is that there is a more sinister plan afoot by the criminals and it has to do with an incident from his past…

Sporting a whopping 14% on Rotten Tomatoes and receiving its fair share of backlash from fans, it makes me wonder what exactly the critics and fan base were expecting from Lockdown. One might guess that it was the title Police Story attached to it that carries a handful of expectations. However, despite its flaws, Lockdown is rarely as bad as those reviews make it out to be. It’s different, sure, and it’s certainly not perfect (we’ll get to that in a minute), but it’s far from being a bad film. Perhaps if the title were Crime Story: Lockdown, people would have had proper expectations on what genre this film is…as it definitely isn’t an action comedy.

With the proper expectations locked in place, Lockdown is a fun and dark little thriller. It’s grounded on some well-established tropes of the genre, including a mystery about the villain that increasingly builds as the film goes on, but it works in some solid ways. The setting lends itself to some striking visuals and Jackie Chan pulls out an all-star performance for the film. He’s not necessarily the most likeable of heroes, as the script points out with his familial issues, and his cool and collected performance is balanced out with a strong villain. Many of the secondary characters, some of which are very important to the plot, are not nearly as fleshed out as one might hope, but it works for what it is. Director Ding Sheng brings about a very modern style to the look of the film with lots of blurred imagery, sharp angles, and intriguing color schemes (a far cry from the very traditional look of his previous work with Jackie, Little Big Solider) and it’s easy to see why fans of older Hong Kong thrillers might find offense in the modern style and look of the film when the core is a bit more classic. However, Lockdown sports some downright impressive tension and plenty of shocking twists to keep the audience hooked into the story. While the “he said, she said” third act does seem to detract from the overall tone of the film a bit, the final chase sequence in the train tunnels might be one of the best emotional thriller sequences that Chan has ever been involved in and fans are certain to enjoy many moments like this in the film.

The main issue that plagues Lockdown for most of its runtime though is the odd structure and random flashbacks it utilizes to build the mystery. It’s as if the writers and director knew that the main issue from fans was going to be the general lack of action in the film so they force some unneeded action set pieces into the script. A vehicle chase sequence and a bit of hand to hand combat against a punk assailant seem utterly extraneous when it comes down to it. Sure the action is decent, but it adds nothing to the overall mystery of the thriller and it seems like fan service. All it does is take away much needed time to really build some of the subtle clues and plot devices needed for the final act to work – which it does, but it seems like a massive stretch. The best action sequence, which actually serves the characters and plot, is an intense little cage match which becomes one of the highlights of the film.

In the end, Police Story: Lockdown is still a flawed thriller for Jackie Chan and company. After the impressive combination of director Ding Sheng and Chan on Little Big Soldier, I would be lying if I didn’t have much bigger expectations myself for this film in execution. However, the film is both new ground for Chan and still retains the heart and soul of some of his earlier flicks like the previously mentioned Crime Story. It isn’t a film that follows the same pattern as the other Police Story films, but it is a strong indication at the range that Chan can deliver if allowed as an actor. Keep your expectations in check and this is going to be a solid night at the movies.