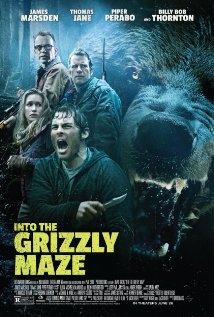 There seemed to be an unusual amount of hype during the production of Into the Grizzly Maze. Who could blame them? This film seemed to have a revolving door of prior A-list actors attached (or previously attached) to it and it was going to be the second film from horror director David Hackl – who had to pull off something better than his first film Saw V. After a slew of name changes, Into the Grizzly Maze dropped on home video a few weeks ago and I was there. Unfortunately, this film is far more perplexing than it is good. For the first half of the film I desperately tried to figure out how such a Sy Fy original film concept could garner such hype, but the film does have its ‘so bad it’s entertaining’ elements that are worth it for B-movie fans. Just make sure you keep the right mindset when going into it.

Rowan (Marsden) is returning home to small town Alaska. His brother Beckett (Jane) is a cop there still and he wants to avoid him at all costs if need be, mostly due to a shady past. However, when a series of brutal murders by a rampaging bear begin to happen in the woods, Beckett needs to find his brother and his wildlife researcher wife before the bear does first…and he might need the help of an arrogant hunter (Thornton) to do so.

Killer bear movies are not nearly as common as one would hope and yet, here we are with two of them in 2015. Whereas Back Country focused more on tension than horror with its bear hijinks (that don’t start until the third act really), Into the Grizzly Maze is all about going for broke on killer bear slaughters and cliché horror elements. While this makes the film wholly enjoyable in a sort of slasher way – if you replaced the bear with Jason Vorhees, we might have had a fun new Friday the 13th film, it also misses out on the man vs nature angle that could have made this film both entertaining AND potent with its concept. The film makes note to give it some sort of ‘nature gone amok’ reason with poachers, but it basically only throws that out there to give some reason for the killer bear. The rest follows a slasher pattern right down to the “surprise” twists.

It doesn’t help Hackl struggles a lot as a director with this. He is obviously a horror director and focuses on the brutal gore (although the hand on the chainsaw is pretty legit) instead of the tension and suspense of having our heroes lost in the forest maze with limited artillery and a massive killer bear. His editing is often awkward around the bear - as is the CGI gore that they put in the bear’s mouth – and it’s not until the finale that we really feel any fear of the bear. The film is beautifully shot, outside of the previously mentioned sub par CGI bits, and the cinematography of the forest scenes is quite effective in feeling overwhelming. However, this is a bright spot in a lot of mediocre things.

Perhaps the biggest and most perplexing thing about Into the Grizzly Maze is just how they managed to attract such a talented cast: Thomas Jane, Billy Bob Thornton, James Marsden, Scott Glenn. This film is stacked. And almost all of them suck. It’s hard to admit, particularly when I love damn near everything Tom Jane is in, but the script is pretty poorly constructed with the various characters and the dialogue is often just as silly as the back stories. James Marsden supposedly gets the best arc, but the way that they go about it is not nearly as interesting as it might have been and poor Tom Jane and Billy Bob are hurled as the two warring sides of how people view nature – and neither get the proper time to dig into their roles.

All in all, Into the Grizzly Maze was a genre film so packed with potential that it almost had to implode on itself. It has its merits as an unintentionally funny film (seeing Tom Jane axe a bear in the butt had me in the giggles a bit) and it seems like the film that might garner a cult following in a handful of years in its glorious B-movie ways, but really it’s just a Sy Fy original killer bear flick that happened to garner a bit of a budget and even more hype.