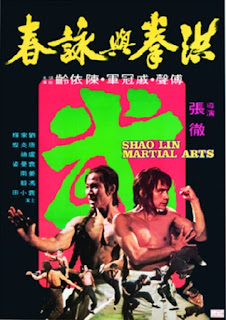 In the last few months Netflix Streaming has taken it upon itself to start offering some old school martial arts titles for viewing, albeit they were mostly older Jet Li action flicks to start with. However, just recently they uploaded a handful of Shaw Brothers titles (in stunning hi-def and with subtitles!) including Shaolin Martial Arts. Having never seen the film before, it never made the cut for a DVD or Blu release in the US, I instantly leapt at the chance. Shaolin Martial Arts features a stunning cast of heroes and villains and it’s directed by the iconic Chang Cheh. Fortunately, the film lives up to its cast and crew as a well-developed and thoughtful kung fu flick filled with everything a fan could want: action, story, and even some gimmicky characters.

The Shaolin temples have fallen to the Qing soldiers and all that is left is for the destruction of the smaller Shaolin camps that have been established throughout the country. When a rival school plans to undermine a Shaolin school for this reason by bringing in two ‘invincible fighters’ (Johnny Wang and Beardy) to start killing off the rival fighters, it’s up to two young students (Chi Kuan-chun and Fu Sheng) to head off to learn how to defeat them from new teachers.

At this point, it’s safe to assume that if there is the word ‘Shaolin’ in the title and it’s from the Shaw Brothers that it might utilize a plot about the aftermath of the destruction of the Shaolin Temples. There is a good portion of films that do anyways. Executioners from Shaolin, Clan of the White Lotus, Shaolin Rescuers…the list goes on. So when Shaolin Martial Arts kicks off with two rival schools and starts to dig into the political/revenge angle of the Shaolin temple plot, then you essentially know where the film is going to go. Baddies are tougher than Shaolin students, students will train, students will win in the end. Bing, bang, boom. It’s fairly simple. However, when it’s Chang Cheh at the helm, there can always be a few twists in the wind that will surprise the audience. Not to spoil any surprises, but there is going to be a few heroes killed in this film – and there is a few nice detours to sell those deaths. It keeps the audience on their toes and invested in the characters, particularly when the film starts adding in some romantic subplots and starts adding depth to the experience. That’s when it tends to hit the hardest and Shaolin Martial Arts does just that.

While Shaolin Martial Arts remains steadfast in the general formula, its execution is what truly raises the film above the basic storytelling that it does. The casting is stacked here and you know that it’s ridiculously stacked when Gordon Liu plays one of the backing secondary roles. Just the villains are played by fan favorites Johnny Wang and Beardy (as gimmicky invincible style roles) and we are giving some decent sized actors for the heroes too – including a Shaw favorite Fu Sheng. While the film does tend to oversell some of its red herrings in the second act and detract away from adding even more emotional beats and depth to the main characters, Shaolin Martial Arts moves at a wicked pace that flows with ease. The film is littered with plenty of fights to keep it going, even if most of them feel a bit generic compared to the sheer power and snappy choreography of the finale. In this way, fans are still going to love what the film has to offer – and as a surprise Chang Cheh throws some a bit of horrific gore in at the end for us. Just to keep us on our toes.

Shaolin Martial Arts is rarely original in its narrative and it’s surprisingly tame for a Chang Cheh film when it comes to big shocks and brutal violence, but the film executes the storytelling and fight work with expert ease to make it a worthy opponent when it comes to classic kung fu. This was a big surprise for me and one that will certainly garner some more watches while it remains on Netflix.