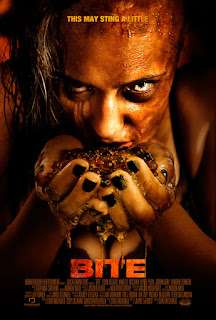 Black Fawn Films are in full drive right now after acquiring a new deal and they show no signs of stopping. Based in Guelph and Toronto, Ontario, the company with multiple directors and features under its belt has been representing the Canadian horror scene lately throughout the years at the festival. Bite saw its world premiere at Fantasia this year to a sold out crowd including the film’s cast and crew and hosted by none other than the festival’s director Mitch Davis. The feature is directed by Black Fawn’s Chad Archibald (Neverlost, The Drownsman) who was to present his own film. With barf bags handed out at the screening, I’d say that was a good idea because Bite is a NOT for the faint of heart or squeamish. If you are though then it’s best to keep your barf bag on hand because this movie is ready to take a bite out of you!

Bite follows Casey (played by Elma Begovic) who decides to take a vacation to Costa Rica with her two friends Jill and Kirsten (played by Annette Wozniak and Denise Yuen respectively) before her upcoming wedding to her fiancé Jared (played by Jordan Gray).  The vacation ends up being an indulgence in partying and booze, leaving Casey to forget about the stresses of Jared’s religious and controlling mother (played by Lawrene Denkers), the wedding, and Jared’s desire to have children. Upon veering off the path of the beaches of Costa Rica due to a recommendation by a local, the trio find a quite an unusual  site where the water is super clear and the wildlife is strange. Casey gets bitten under the water and simply waves it off until she is back home and the bite starts to get worse...


Much like many of Black Fawn’s features, our cast here are mostly Canadian newcomers and for some this is their first feature film including our lead Elma Begovic whose performance is pretty good for someone who seemed to spend almost half of the film covered in goop! Bite instantly reminded me of recent films such as Contracted and Starry Eyes except this time the victim is turning into something way more cunning and dangerous. I will admit, the amount of sticky, thick, and discolored bodily fluids was enough to make an average movie goer's stomach curl, but if you’re a horror veteran then you probably don’t need your own barf bag. Other than the main attraction, the film focuses on Casey’s own problems with her fiancé and his mother from hell which fuels her decisions, emotions, and instinct as she slowly turns into a monster both physically and mentally. It was actually quite apparent during the Q and A that both the cast and Archibald were very passionate about the film, especially when it came to the effects which are by far the film’s strong point. I hadn’t been so disgusted by a film like this in years. Even two of the film’s attendants had actually rushed to the public washrooms during the screening of Bite which speaks a lot for the film itself. Another thing that wowed me was the set design. It truly looks like they ruined an apartment with the icky stuff that we see throughout the film oozes out of our lead. Other than the special effects, the plot is very standard and the characters are quite unlikable. Our curiosity is more invested in what will become of Casey and what will happen next.

Would I herald Bite to be a cinematic masterpiece? Not even close. But as a horror film, it does exactly what it sets out to do; disgust the hell out of the audience and deliver on the special makeup effects. Normally a horror film goes great with popcorn and your choice of your favorite soda but this is one movie that you might prefer to watch on an empty stomach. Bite feeds on our fears of what we might experience after encountering the unknown because nature can be just as frightening as the killers on the street and ghosts that go bump in the night.

Elise Holmes is not your average writer. Dedicated to her Evil Dead fan site The Deadite Slayer, she is doing Fantasia Fest coverage this year for Blood Brothers! Check out her site HERE!
Posted by DarkReif at 7:57 PM