Zatoichi Goes to the Fire Festival (1970) 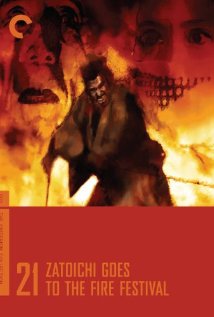 If you go back through the reviews for the previous twenty films in the Zatoichi franchise, you’re likely to find a theme: these films adhere fairly strictly to a formula. For some of the films it’s a detriment, but for others it allows the film to add smaller nuances and style on top of the foundation. In the case of the previous film, Zatoichi Meets Yojimbo, it was a blessing. This is what makes Zatoichi Goes to the Fire Festival one of the most unique, fascinating, and often perplexing entries into the series. Essentially, the formula goes out the window. In its place is a film that’s a loosely threaded together series of ‘occurrences’ for our blind swordsman hero. Some that work and some that don’t. It makes it one of the more ambitious entries, but far from the best.

Zatoichi (Shintaro Katsu) desperately wants to do good in his life. When a good deed gone wrong gets a maniacal swordsman (Tatsuya Nakadai) on his trail, he finds himself pushing forward in a different manner. This also puts him at odds with a very powerful yakuza boss (Masayuki Mori) who respects Zatoichi, but will do anything to make sure he doesn’t interfere with any of his future plans. Also there is some stories where Zatoichi falls in love, saves a woman from sexual servitude, and helps a young man find a way to be a true man. Whatever.

The biggest hurdle to overcome in Zatoichi Goes to the Fire Festival is the sort of stream of consciousness flow that the narrative contains. It’s not unusual for the film to start off in one direction, take a wicked left turn and go another direction, only to take a wicked right turn and come back to the original path. There is a slew of secondary characters that litter its story (most of which are irrelevant, but fun) and the film has no qualms in taking rapid shifts of tone at a moment’s notice. A bath house assassination attempt, for example, goes from suspenseful to slapstick comedy to shockingly violent to silent – all in one sequence. The humor throughout many of these pieces is a bit hit or miss (an issue that has recently hindered many other films in the franchise) and there are some subplots that simply needed to be cut out for the sake of deepening other ones. An entire portion of the film is dedicated to Zatoichi helping a young man, who tries to lay on the sexy moves on our hero at one point, learn “to be a man.” While it leads to some of the better dialogue that the film has to offer about Zatoichi’s character, it’s unneeded weight on a film that desperately needed to add time to the romantic subplot that actually plays a role on the main story.

The film is essentially carried by the visual storytelling of director Kenji Misumi. His last film in this franchise was a massive disappointment and his final one here certainly showcases a man with a knack for strong visuals – even if the rest of the film tends to be more wishy-washy than normal. There are dozens of iconic moments littered throughout the film, a scene where Zatoichi buries a young woman, the previously mentioned bath house fight ends with a great blood in the water piece, and the finale is outright insane with its extras and the lake of fire that erupts, but the film rarely capitalizes on some of the serious moments of subtle character work that Katsu and the rest of his cast bring to the table. The two villains of the film are both fascinating characters in their own right, but the film spends so much time showing Zatoichi dodge horse piss and other random things that it misses out on some of those opportunities to strike when the iron is hot.

All in all though, Zatoichi Goes to the Fire Festival is a pretty entertaining entry even if the film is significantly flawed. It’s easy to see why fans tend to love it for its quirky moments and daft plotting. However, compared to the more serious and hard hitting emotional entries of this franchise, this one falls short. It’s just too scattered and uneven to work the magic elements that are so obviously pieced throughout the whole film. If viewers are aware of its inconsistencies, it’s a film easy to forgive due to its charm and outlandishness. Just make sure you go into it with the right mindset.