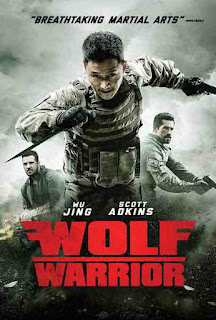 Despite its general luke warm to cold reviews, I was still looking forward to Wolf Warrior. Call me old fashioned, but we just don’t get B-grade action films like we used to. As someone who grew up on the likes of Stallone, Van Damme, and Seagal, I have a well-rounded love for the big budget bad action flick. While Wolf Warrior most certainly falls into the very same categories as some of the Hollywood's best of the worst, it was also a remarkably enjoyable film experience. Don’t expect anything above a low brow explosion riddled, loosely threaded film and you’ll find plenty of cheese and action to go around.

Leng Feng (Wu Jing) just earned himself a one way ticket out of the army for disobeying an order in combat, but he’s also earned his way into one of the most elite training and fighting groups in all of China…THE WOLF WARRIORS! Yet while on a training mission with the army, these elite soldiers find themselves at odds with a vicious and well trained group of international mercenaries lead by a ruthless killer (Scott Adkins). Is there something else more sinister afoot?

In a way, Wolf Warrior represents three kinds of Hong Kong action films: the old school action flick, the modern action flick, and Chinese military propaganda film. On top of that, director/actor/co-writer Wu Jing made one hell of a vanity project out of Wolf Warrior too. He essentially plays an unstoppable force of strategic and military might (seriously, he gets shot like five times in this, outruns snipers, and somehow survives stepping on a landmine) that rivals Rambo in many situations…and strangely enough always seems to be remarkably sweaty while doing it…and his wonky survival tactics and unwavering patriotism harkens back to the days of 80s muscle. This is balanced with a sense of grounded Hong Kong action dynamics including plenty of gun fighting and an impressive knife fight with the ever awesome Scott Adkins in the finale. There are even a handful of scenes that seemed inspired by Eastern Condors – just not nearly as good or effective, but present nonetheless. It’s the relentless pacing of the film and obvious old school foundations that make Wolf Warrior so much fun to watch.


Layered on top of that, Wolf Warrior still employs a lot of modern action techniques. The film has some decidedly crisp production values and tends to want to use far too much CGI for its own good – a plague upon the house of Hong Kong for many years that particularly rears its ugly head in a very random sequence where the soldiers have to fight off a pack of actual wolves. I shit you not. The plot is also a blend of the old and new as it takes the idea of a weapons dealer that uses a “revenge tactic” to cover a more diabolic and modern twist…stealing a biological weapon that is genetically designed to only kill Chinese people (?!?!). The narrative here is rather weak and a lot of the character progressions feel forced and unnecessary. A romantic subplot between Wu Jing and Yu Nan seems to be jammed in (despite a fun bad performance from the latter) and even a strange parallel with another solider that’s told in flashback doesn’t work nearly as well as the film thinks it does.  This, along with some editing issues, makes Wolf Warrior rarely the poignant flick it wants to be.

Yet, in what might be one of the strangest moves, Wolf Warrior might as well be one of the most expensive propaganda films I have yet to see. It’s many monologues about the strength and righteousness of China, the “I Fight For China” patches The Wolves wear, and even the strange dialogue between Adkins and Wu Jing in the end about country pride versus money seem to hammer its not-so-subtle subtext home with a cannonball. Even the random biological weapon that ONLY KILLS CHINESE PEOPLE seems to smack of hilariously obvious propaganda. It’s not that it’s wholly different then what many of my favorite action flicks of my youth did (I’ve seen Rocky IV a lot of times), but it was a shock to see the film so blatantly throw it out there in this modern age.

For fans of B-action flicks, Wolf Warrior is packed with outrageously fun action and some of the silliest plot twists you are likely to see this year. The film is not at all effective with its secondary characters (it’s barely effective with its main character) and the plot is about as loosely threaded as they come, but I’d be lying if I said I didn’t have a blast watching it. With a promise of a Wolf Warrior II in the mid credits, it’s hard for me to say that I wouldn’t be excited to see what ridiculous shit they come up with for a second film, but for now I’ll just say that despite its gaping flaws and eye-rolling pieces that I enjoyed the hell out of Wolf Warrior. Warts and all.