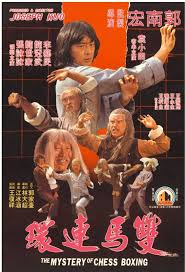 In martial arts cinema there have always been the ‘big two’ companies for quality material: Shaw Brothers and Golden Harvest. However, they are not the ONLY two companies that put out massively enjoyable kung fu flicks in the 70s and 80s and there are a handful of great flicks worth your time that are not from those banners. Take The Mystery of Chess Boxing as a major example of one of those films. Despite its low budget, The Mystery of Chess Boxing – also known as Ninja Checkmate in the US – is a massively entertaining and energetic film littered with charming performances and hinged on two of kung fu’s greatest characters: the Chess master and Ghost Face Killer. It's classic with a capital 'kung fu.'

The time has come for some of the greatest masters of kung fu. A renegade killer named Ghost Face Killer is hell bent on revenge and he will stop at nothing to finish his list and kill all of those who tried to kill him. For a young man (Yi-Min Li) looking to learn kung fu himself, it’s a date with destiny he doesn’t know is coming. With the help of a few teachers, he is going to have to master both chess boxing and the iconic Five Elements Style if he is going to overcome the Ghost Face Killer (Mark Long).

Kung fu fans owe it to themselves to at least partake in this film at least once. It’s not wholly original with its vengeance plot that surrounds a young man looking for a path in life, injected with a bit of Jackie Chan-esque physical comedy and a whole lot of gray wigs for all of the grandmasters, but the film is wildly energetic in its delivery. The film has some unique flaws to its name, including some major editing issues that mess a bit with the narrative flow and a subplot in the second act featuring the drunken master himself Yuen Siu Tien that doesn’t feel fully fleshed out, but the resounding charm and high speed fight sequences do more than make up for most of them. It helps that the film has three very big screen presences in its cast with Yi-Min Li as the lovable every man hero and Jack Long and Mark Long as the teacher and villain respectively. The combination of these three, however, particularly in the final fight, is truly a kung fu sight to be reckoned with. The humor can be a bit hit or miss, the dubbing pulls away from the more serious moments too, but the film flies by with a wink and a kick that’s essential martial arts viewing.

To top it off, the fight work in the film is phenomenal. The film starts off catering a bit to the Jackie Chan school of funny mischievous slapstick kung fu, but it’s intermixed with a series of rapid fire and impressively choreographed assassination sequences that sees the iconic villain Ghost Face Killer murdering his way closer to our heroes. The film spends a bit of time with the fan favorite training pieces in the second act to speed things up, but nothing quite prepares the audience for the super long and shockingly diverse battle at the end of the film. It’s simple as it tags in characters and eventually works its way into a 2 on 1 throw down, but it’s highly entertaining.

Truthfully, the worst part about The Mystery of Chess Boxing is the quality of the actual film. Sure there are some issues here and there with plotting (the Chess master’s daughter seems to be thrown in to have some sort of feminine aspect of romance for shits and giggles), but the terrible condition of the film itself makes it a bit hard to watch. As far as I know, only a dubbed version exists and the film is heavily cropped and a bit blurry visually. It’s sad that a true gem like this film never got the proper treatment and time has degraded the experience, but it makes one grateful we have it at all.

The Mystery of Chess Boxing is hardly perfect when it comes to traditional movie critique, but it’s a guaranteed kung fu fan’s dream when it comes to rating it based on that bias.  At some point I hope some miracle arises and a better quality version comes to the surface for fans. Until that point though we will just have to enjoy the film for its relentless energy and powerful fight sequences.