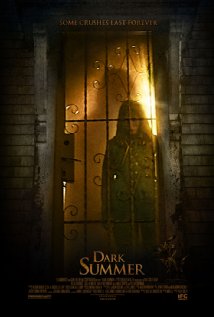 Despite being released by IFC Midnight originally and then getting a joint home video release by IFC Midnight and Scream Factory, Dark Summer seemed to be just another ‘haunted house’ flick for teens based on the trailer and media being spread for the film. If it wasn’t for its immediate release on Netflix Streaming then I probably wouldn’t have been bothered to dig into the film until much later. For the most part, Dark Summer is exactly as one would expect: a slow burn, teen angst driven, haunted house film. For the most part. Luckily, the film is ignited with a fun third act that damn near saves the entire film from being too cliché. It’s a little too late in many regards, but it does raise of the quality of the film somewhat.

Daniel (Gilchrist) is a young man with a few problems. After being convicted for stalking and invasion of privacy charges against a girl in his school, he’s throw under house arrest for the summer with limited visitations and forbidden to use a computer. When strange things start to happen in his house though, his two friends (Maeve, Harrell) are going to have to help him discover just what is stalking him now.

To be honest, the first two thirds of Dark Summer are a bit of a chore to get through. The film is a bit of slow burner, meant to be a sort of character study for a character we aren’t necessarily meant to understand (for a reason) who essentially acts like a confused ass for most of this portion. There is also a lot of subtle stuff that is being played out here particularly in some of the weirder plot progressions and details that will eventually come full circle, but the atmosphere and scares are something we’ve seen over and over again in these kinds of modern haunted house films. Creepy tech experiences? Strange shadow work? A mystery to unravel? Been there, done that. Even the occasional presence of genre great Peter Stormare seems a bit strange as the only real adult we see the entire film despite some scene stealing moments. Where is this kid’s parents? Talk about shitty parenting that we don’t even see his supposed mother call or attempt to be a parent when her son is under house arrest when she isn’t there, but that’s beside the point. We get it, he’s isolated. Blah blah blah. It’s just a bit forced overall and doesn’t raise the film above its means at this point.


However…and this is a huge however…the third act makes most of the generic plot progressions, character interactions, and cliché atmospheric touches worth it. It’s not quite enough to simply forgive what the audience had to sit through, but holy shit did Dark Summer try. Not to give too much away plot wise as the surprise of this third act is a big part of the fun, but there are a handful of twists that make paying attention worth your time. There is even a sequence where the twist requires some flashbacks to make sure the audience understands where the twist came from. Normally, I dislike flashbacks as a sort of crutch that films use to create false dynamics, but here it’s almost necessary because the twist works so well that I’m not sure I would have been able to put it together without a bit of a reminder of the events that happened previously. Again, it doesn’t necessarily erase the rather yawn inducing approach to the first two-thirds, but it’s impressive at what it pulls off.

Horror fans are certain to find Dark Summer to be a bore overall with its generic scare attempts, well-worn tactics, and generally silly characters, but I know plenty of horror films this year that are much worse than this. If you happen to have Netflix Streaming, it’s essentially a free watch so it’s not a terrible way to spend an afternoon. If anything, it might be worth the watch to see a film desperately claw its way from the grave it dug for itself…and almost succeed.

Written By Matt Reifschneider
Posted by DarkReif at 6:18 PM