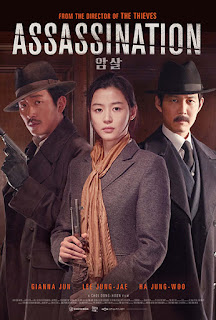 Historical dramas, even if they are within the edges of being a thriller, rarely get reviewed here at Blood Brothers despite some intensely high quality aspects of the films themselves. Nothing against the genre, but it’s not quite the cult material that we tend to dabble in. Assassination, however, is a big exception to the rule. I say big because this film is chock full of genre tropes within its dramatic and historical context and the execution in getting it all into the film is superb. A bit of action, a bit of espionage, a bit of thriller, and a whole lot of awesomeness. Enough so that Assassination is likely to be one of the best, if not THE best, thriller released this year.

As the Japanese occupation of Korea continues into the 1930s, the resistance is struggling to get the upper hand. To do so, they come up with a plan to assassination two key officials in the Japanese military and business communities. It’s going to take a handful of assassins, a sniper (Gianna Jun) a demolitions expert (Choi Deok-moon) and a military gunman (Cho Jin-woong), to pull off the job. With a notorious hitman and his partner in the city (Ha Jung-woo, Oh Dal-soo)and a spy in their midst, it’s going to take a lot more than just detail planning to pull this off.

While many reviews or critiques of period drama pieces might spend the majority of their time talking about the sets, costumes, and accuracy of time (which as far as I’m concerned are all handled quite well here), Assassination uses those elements to simply paint a visual picture on top of a film that is timeless and universal in its message about power shifts, personal moral drive, and characters that the audience cares about – whether or not they do the wrong or right things. The core of this film is spectacularly dense in its thoughtful writing and it allows the cast and crew to execute a film of only the highest caliber. It helps that the film navigates a variety of genres to get there, a bit of comedy, drama, suspense, and action, but the basis of the film is impressive. It allows for a lot of great things to be built on top of it.

At this core, Assassination is a character and plot driven film. Luckily, the film has some of the sharpest and most engrossing writing for an espionage film in years. At about an hour into the film, there has already been enough plot and twists for an entire film itself…and there is still an hour and twenty minutes to go. Thus, in the rest of the hour and twenty minutes, there are enough shocks and spins to the story that by the time the credits roll, it’s likely you will have motion sickness. It’s impressive. While this kind of ridiculous roller coaster ride of twists and turns can be detrimental to a film, Assassination’s writing is so spot on and the acting is so subtle in its brilliance that it works in spades. The film starts off as a sort of heist flick as the character Yem starts to build a team of fighters for the job, but it’s quick to shift into a thriller concept as things start to get complicated with spies, deaths, and – I kid you not – a long lost twins spin that pops up. By the time the finale rolls around, featuring a full siege of a wedding with guns, grenades, and grit, the viewer has no choice but to keep going just to see how things turn out. Fear not because no matter how ridiculous the plot seems to knot itself up, Assassination ably navigates the various characters and situations with remarkable finesse. As I said, the writing is sharp with a capital ‘S.’

Not only does Assassination deliver an entertaining story populated by relatable characters, but it delivers a film that carries an emotional resonance that makes the various characters feel utterly real. To add to the complexity of the plot, the film spins its story with what could be described as three main protagonists that drive the action. While all of the roles, no matter how small, gimmicky, or throw-away, are played with detailed precision, it’s the weight of the performances of these three protagonists that truly carry the film. Since the film doesn’t necessarily rely on a lot of action to push the plot forward (there are two major assassination sequences that work to build and break tension) it has to rely on the character arcs and discoveries within the writing to deliver the connection to the audience. Assassination does it with striking effect. Not to give too much away, but there is a lot of depth to the characters and their connections for a viewer, seasoned or not, to sink their teeth into and it makes the emotional side just as effective as the twisting plot.

Assassination is a film that works on all levels: visuals, performances, and script. It’s truly a piece of cinematic art to watch unfold right in front of you as all of the pieces are laid out, scrambled, and put back together in new and effective ways. It’s not the most action packed spy film you’re likely to see, but the combination of various genres and the high quality execution makes it easily one of the best films released this year – no matter what genre. Cinephiles are definitely going to want to take the time to experience Assassination. It’s worth the time and effort to understand it.