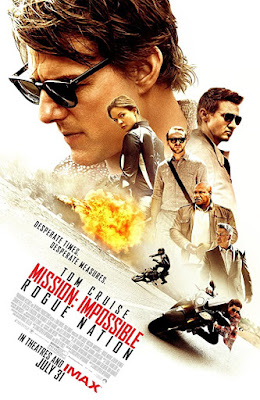 It’s not very often that the fifth entry into a major franchise is one of the best ones (in the case of Fast Five it was and still is the best one), so walking out of Mission: Impossible – Rogue Nation I couldn’t help but feel pretty satisfied. While I still wouldn’t consider it the best of the franchise, that accolade still remains with JJ Abrams third entry, Rogue Nation delivers another round of energetic and outrageous spy action…albeit with a bit more humor and a bit more of a classic espionage approach to the entire thing. The results are another fun – and surprisingly sound – adventure flick that will appeal to longtime fans as well as new ones.

Ethan Hunt (Cruise) is onto something big. The Syndicate. A group of rogue agents from all over the world trained to create disaster and chaos as efficiently as the IMF can stop it. Unfortunately, the CIA and its director (Baldwin) see the IMF as a loose cannon themselves and they pull the plug. So it’s up to Hunt, with a little help from his friends, to finally uncover the biggest anti-spy organization this side of Spectre.

Love him or hate him, Tom Cruise has been on a roll lately with his films. Whether it’s an old school thriller like Jack Reacher or the bonkers time jumping science fiction of Edge of Tomorrow, his last handful of films have been impressively consistent in quality. You can certainly add Rogue Nation to that list. Oddly enough, there is another element that threads through all of the mentioned films outside of the screen charm and stunt performin’ draw of Tom Cruise – and that’s writer/director Christopher McQuarrie. If you take the entertaining action and humor of Edge of Tomorrow and inject it with some of the classic action elements of Jack Reacher, that’s the balance you get in Rogue Nation. It’s a very fun way to go about it and it makes this film feel a bit refreshing after the sheer ridiculousness of the last one.

When it comes to hitting all of the Mission: Impossible elements, Rogue Nation does so in spades. Elaborate theft schemes? Try on an underwater computer card transfer that will have you holding your breath along with Hunt. Rag tag team of IMF agents that have to go rogue to stop a world ending disaster? Hasn’t every film had that? Try death defying stunts like Tom Cruise hanging off of a plane or skipping his way up a pole in handcuffs. At this point, if you stick to the bread and butter of what made this franchise so enjoyable to begin with, it’s hard to go too wrong. The film is brimming with fun and exciting action sequences and plenty of twists and turns along the way. At this point it’s even fun at guessing just when the mask reveal is going to happen. Long time M:I fans are definitely going to find things to love about this film.

To add to the fun, director Christopher McQuarrie adds a bit of old school spy thrills. The previous three films have sacrificed a bit of the actual “espionage” for the sake of entertaining action (which isn’t a dig at those films because it works), but Rogue Nation adds in just enough fun twists and turns to make it feel a bit refreshing. While the entire “is she with the good guys or with the bad guys” element for Ferguson does seem a bit cliché, she sells it in Rogue Nation and adds a bit of much needed feminine screen power to a franchise known for just leap frogging around it. McQuarrie also has a knack for using darkness and light in his visuals to add old school flair to the film. The finale is in the darkened allies of London and he uses it to some craft some great atmosphere. The previously mentioned Ferguson gets a stellar knife fight at this moment that might be one of the highlights of the entire franchise – despite not being an over the top stunt.

Once again, the biggest issue that this film has to contend with is the lacking presence of a strong villain. It’s somewhat avoided here, in a similar manner to the first one, by having the plot be the biggest antagonist for our heroes, but it’s still an issue. Sean Harris desperately attempts to make his screen time foreboding and creepy with his performance, but never once was I wholly convinced that he was a true competitor to Cruise’s Hunt – whom at this point is damn near god-like in his ability to survive anything. Along these lines, the added screen time for Simon Pegg was a huge crowd pleaser for the audience around me, but his role seemed significantly catered for that exact reason. It’s not a huge detriment for the film (he’s funny, so there’s that) but there were times when it felt like it could have been fleshed out a bit more instead of the “he’s my friend!” motive.

Despite some hiccups here and there in the ridiculous plot and some of the lacking character depth, Rogue Nation remains a massively entertaining summer blockbuster worthy of the time of its audience. Long time Mission: Impossible fans are going to love the old school elements that McQuarrie slides in and the newer fans are going to eat up the outrageous stunts and silly humorous banter of the IMF team. It still falls a bit short of Mission: Impossible III, but I’ll be damned if this film doesn’t give it a run for its money.