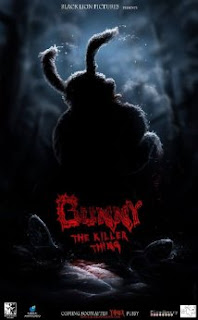 Directing nothing but shorts up until now, it seems like Joonas Makkonen got the funding and freedom to make the film that he wanted. If you weren’t expecting it to be about a raging horny man/rabbit hybrid out to fuck any human vagina or anything that looks like one up in the Finnish mountains, then well I think that I need to be the bearer of some quite awkward news. Bunny the Killer Thing is a Finnish/British co-production that you’d probably compare more to a 80s Troma film than anything that has come out in the last ten years. Sexually depraved is not enough to describe how over the top and morally corrupt this film is. And how could anyone even come up with something this insane? If you find yourself complaining then this is just not your type of film and you best take your prude self over to some vanilla Hollywood brainless blockbuster. But for us trash lovers; Makkonen’s feature is more akin to a masterpiece of schlock.

Bunny the Killer Thing first quickly gets our story of the source of the creature out of the way and then moves on to meet our main cast. You are greeted by a group of young Finnish individuals and an underage teenager who sneaks in the “borrowed” ambulance from work looking to travel to Tuoma’s (played by Hiski Hämäläinen) uncle’s cabin for some drinking and sex. On the way up they stumble upon a stalled car with a multicultural group of three British men with an awful secret hiding in the trunk of their car. The Finns don’t notice and kindly decide to harness the vehicle to bring the visitors up to the cabin to hold up for the night. It’s not long until Tuomas himself is the first to encounter the monstrous human/rabbit hybrid with a huge dick that he proudly waves around. We are then treated to havoc, gratuitous nudity, death galore, bestiality, and our director’s sick sense of humor. We later learn why bunny was created and the survivors get their own run in with another new breed of criminals.


Because of the clash of the British and Finnish cast, the subtitles might confuse you at first since it switches from English to Finnish in an instant but luckily one can adapt to this. One of the various treats that Bunny the Killer Thing gives us is the rather large cast. We have the psychos who created bunny, the young Finnish folk, some bumbling policemen and the English crooks along with some extra characters with a short appearance near the middle and the end. We get to know our main cast surprisingly well. For such a depraved film where nothing is deemed sacred, one scene in particular is presented in the absolute opposite which contrasts to the entire film, taking the subject of rape seriously (and no it isn’t by the horny bunny man either). Otherwise expect to see many of mutilated penises, heads blown off, themes of homosexuality and pukey kisses. One can only imagine how many fake cocks were even made for this feature! Makkonen might be lucky if he even gets to stay in the country after this creation comes out in theaters in his homeland. The director isn’t scared however as he already has another hopeful film in the works and is even willing to return to the Finnish mountains for Bunny the Killer Thing 2.

Whether Bunny the Killer Thing is a film well worth your cash is well up to the viewer. Any Troma fan who thinks that there is no line to cross will lavish their praise and will find themselves dying in laughter. If you’re more a fan of serious, atmospheric and suspenseful horror, then you’ll find none of that here. With a name like Bunny the Killer Thing, can you really expect that anyway? Bring your sick friends and weed out the prudes because sexual depravity and chaos is best enjoyed with liked minded individuals and Bunny the Killer Thing takes no prisoners.

Elise Holmes is not your average writer. Dedicated to her Evil Dead fan site The Deadite Slayer, she is doing Fantasia Fest coverage this year for Blood Brothers! Check out her site HERE!
Posted by DarkReif at 7:56 PM