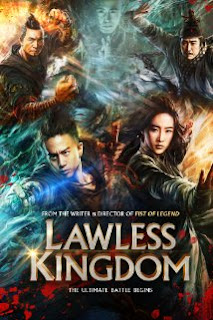 First things first, if you are someone looking to watch this film without seeing its predecessor, The Four, I want you to stop everything and go see that film first. The Four II, or as the US release would like it to be called Lawless Kingdom, is very much dependent on the viewer knowing the character arcs and plot points of the first film for this film to work. After watching The Four II for the first time, I had to go back and rewatch The Four again before partaking in this action fantasy flick a second time for this review. Once I did, there were a lot of little things that made a lot more sense with the first film fresh in my mind. So don’t let the new title fool you, this is a sequel that very much depends on you knowing the characters arcs and plot elements of the first film.

After the events of the first film, Coldblood (Deng Chao), Emotionless (Liu Yifei), Iron Hands (Collin Chou), and Life Snatcher (Ronald Cheng), have become public heroes known as The Four. Yet, their roles as detectives in the Divine Constabulary are going to be put to the test when their leader Zhuge Zhenwo (Anthony Wong) is accused of killing the Sheriff King. Coldblood is sure that he is the perpetrator, but it drives a wedge into his relationship with Emotionless which makes the conspiracy they uncover all the more difficult to see clearly.

The Four II (I refuse to all it Lawless Kingdom, for the record) is a unique beast and one that inspires a lot of dedication from its viewer to sift through all of the characters and plot that occurs during its runtime. Strangely enough, the film is also loosely “to be continued” at its end, so the story is so epic that it couldn’t be contained in just one film and there are a ton of threads left to be tied up in The Four III – which at this time hasn’t gotten a release date for the US. For those of you that purchase the film, prepare yourself for a lot of open plot elements by the end. However, The Four II does handle itself decently well considering that fact, and the mysterious plot, no matter how predictable, is executed with energy and impact. The fantasy elements can be a bit much, particularly when it comes to Coldblood’s monstrous side or a trap during a fun jail break sequence that deals with fiery oil and a collapsing bridge that happens to feature a bit of hit or miss CGI, but the film has a strong cast and a fun Sherlock Holmes-esque mystery to unravel. Stick with the film because it can be daunting with its big cast and the slathering of names that will be spewed at you, but it’s worth the time invested.


It helps that the cast is great and they all seem dedicated to the cause. There isn’t a whole lot of development for most of our heroes, particularly since a lot of that ground was covered in the first film, but they seem heavily invested in making every moment work. Particular note goes to the secondary characters outside of the titular Four who have to carry some of the more ambiguous scenes to move the mystery plot forward. Partnered with some strong visuals from director Gordon Chan, who handles the fantasy elements remarkably well within the context of the universe, and generally speaking The Four II comes off as a rather riveting film.

Oddly enough, the film does seem a bit light on action overall and the film’s structure makes the big action set piece (the previously mentioned prison break) come at the end of the second act. The film spends a lot of time developing the story and character interactions for a big reveal at the end of the third act. The action, when presented, is fun in a sort of magical wuxia manner, but compared to the more classically structured first film it doesn’t feel quite as intense as it might have. For an action film, it tends to feel a bit forced at times.

In the end though, I have to admit that I sincerely enjoyed The Four II. Where it falls short of the original one in wuxia style action and structuring, it makes up for in plotting and twists. The combination is still more or less blockbuster style fun and entertainment, but it’s definitely more thoughtful in its execution than it could have been. It’s cheesy and the fantasy elements will not please a lot of more mainstream fans, but for those looking for an entertaining foreign film excursion, then The Four II is an effective film.

Let’s hope for the sake of those who don’t want to import the film from China that the third film gets a US release eventually – even if it is under the stupid name Lawless Kingdom II.