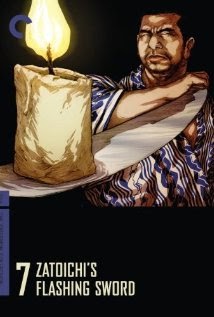 As my journey with Zatoichi continues, I have to be thankful for one thing: at least these films like to throw in some different styles and approaches to keep things interesting. Too much of the same thing can definitely be a bad thing. For the seventh film of the franchise, Zatoichi’s Flashing Sword, the film takes a duel identity to proceed with another adventure for our blind swordsman hero. This entry is handedly the weakest thus far, continuing a downward slide for the series, but it’s saved by a strong third act and some fun set pieces throughout.

Zatoichi (Katsu) is still hunted by his enemies and when a young man shoots him while on the run, he finds refuge in a small river village where a young friend take him into her father’s home. There he finds that her father is at odds with the leader of another village across the river and the villainous yakuza has a deal with the local law enforcement to try and force him out of his business deal for trade on the river. Zatoichi’s presence complicates matters as he is forced to draw his impeccably fast sword once again.

Zatoichi’s Flashing Sword is a tale of two films, stylistically speaking anyway. The two halves go about continuing the story with some substantially different tactics that make the film feel a bit schizophrenic at times. The first half of the film is dedicated to approaching the origin of the plot with more a humorous twist. The opening sequence sees our blind hero sleeping an inn and when three pesky flies continually bother him, he whips out his sword to cut them down in mid-air haphazardly throwing in a ‘damn flies’ line to the stunned residents of the inn. This is an indicator to what the first half will be like and while the plot doesn’t necessarily follow the style (a tense chase in the opening that sees Zatoichi shot rarely carries the tension it needs) the film pushes the slapstick humor forward time and again – whether it works or not.

The second half is a different tone altogether. By the half way point of the film, Zatoichi’s Flashing Sword drops the humor for a more traditional swordsman film style and it works much, much better. Here we are finally introduced to the uprising tension between the two businessmen and the plot starts to get a bit more complicated. Granted it felt like Zatoichi was a secondary character in his own film for most of the second act as it tries to establish the players of this swaggering swordsman flick, but the turn in style works. This leads to perhaps the best portion of the film – the final act. At this point director Ikehiro struts his grindhouse stuff (much more aligned with his work in the previous installment Zatoichi and the Chest of Gold) and throws in all kinds of great badass material. Starting with an underwater sword fight (!) the movie moves to the final act that is back dropped at night during a fireworks show where Zatoichi proceeds to fight off an entire clan of samurai to the bright red and blue colors of the entertainment display in the background. It’s awesome and made the rest of the film worth sitting through.

While Zatoichi’s Flashing Sword continues the downward slide of overall quality for the franchise, the film is almost saved by its last act – a brilliantly shot and well choreographed assassination that makes one of the best sequences in the series. The rest, however, tends to be lacking the characters and plot to be even considered one of the best. The humor is mostly forced and even the plot’s conveniences are not sold well enough for me to recommend it outside of fans of the series. Here’s to hoping that the next installment is a bit more cohesive.