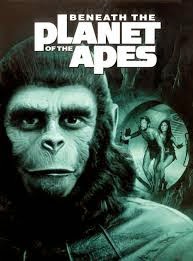 With the success of Planet of the Apes for 20th Century Fox it was inevitable that they would try to push the franchise forward. Unfortunately, there were a ton of massive debacles in trying to get this film made. Seriously, if you are interested in this franchise you should look up the behind the scenes drama that unfolded will trying to get Beneath the Planet of the Apes on the screen. These issues (everything from casting, to scripting, to drastically cut budgets) certainly take their toll on the final product of the film. Beneath is still a fun science fiction flick, but it doesn’t even come close to touching the heights of the first film.

After Taylor (Heston) and his crew disappeared with their ship, a rescue team was sent to find out their fate. A young astronaut Brent (Franciscus) finds himself stranded on the same planet as the team previous. With the help of Taylor’s mate Nova (Harrison), Cornelius (Watson), and Zira (Hunter), he will have to navigate a disruptive gorilla uprising in the ape city and investigate where Taylor ended up when he went beneath the planet of the apes.

While the first Planet of the Apes was a science fiction film with some solid thrills to be had, Beneath aims for something even more epic with bigger threats and more action. Too bad the budget constraints and cheesy script don’t necessarily allow it to reach its full potential. Truthfully, there is a great little science fiction film in Beneath – more like two great films in there. The script is just so scattered between the two halves of the film though that one really has to suspend any sort of basic belief system to even start to try and digest the film. The first half, dedicated to following a similar plot line as the first film, does add in some intriguing political commentary about militant leadership and ant-war stances. Then it sort of careens towards a crazier path (as if a planet full of militant apes wasn’t crazy enough) by actually taking our heroes – minus Cornelius and Zira who sort of serve as glorified cameos – beneath the surface to uncover bomb worshipping mutant humans with telepathic powers of illusion. If the flow between these two halves was a bit better and didn’t degrade itself into a sort of comic bookish finale then perhaps it would have worked better. It just doesn’t though.


On top of that, Beneath pushes itself more towards being an action film in many sequences to match the thrills of the previous film, but often enough it comes off as a bit desperate to entertain more than fitting for the film. A fight on a wagon is pretty impressive, but feels tacked on for example. Fransiscus, who seems to be hammered into a Heston clone here, seems to be phoning in his performance in between those action set pieces too leaving a film that just meanders through the motions. Generally speaking, most of the actors seem to be a bit limp in their respective roles outside of Gregory who delivers some memorable moments as General Ursus with his classic ‘the only good human is a dead human’ monologue. The roles of Zira and Cornelius are butchered to cameos and the mutants at the end are played with such serious cheese it’s hard not to laugh towards the end.

While Beneath is somewhat of a fun film in the campy factor, it’s such a massive step down in every category from the original that it can never shake that aura of disappointment it carries with it. Fransiscus is misused, the plot scattered and often forced, and the increased focus on action doesn’t quite pay off like they intended. While the film has some merits in the franchise as a whole (particularly the awkward and somewhat sudden ending), as a film its massively disappointing.