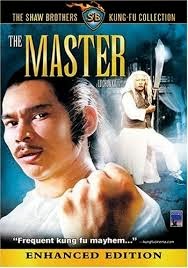 Outside of knowing Chen Kuan Tai, I went into The Master with relatively no expectations. I knew the film was from 1980 and I knew that it was a kung fu centered flick being part of Tokyo Shock’s kung fu line from Shaw Brothers, but that’s about it. Needless to say, like many of the Shaw films from this era, The Master is a mixed bag overall. It’s a fun film balanced on a charismatic lead performace and some ridiculously tiring acrobatic kung fu set pieces, but the hit or miss humor and the simplicity of the film don’t necessarily bode for a memorable flick.

When a traveling kung fu master Jin Tien-yun (Chen Kuan Tai) decides to end the underhanded debauchery of the Three Devils, he is betrayed and left terribly wounded. He finds shelter in the home of a young martial arts student Gao Jian (Yuen Tak), who then begins to learn under his secret teaches. When the Three Devils begin to hunt down the injured master, the young man must step up to the plate and figure out a way to stop them before the destroy everything.

On paper, The Master is a serviceable kung fu flick with a solid revenge twist in the latter half, gimmicky villains that our hero must defeat in sequential order, and a good dose of themes about loyalty, courage, and hard work. It’s not a whole lot more than that, but down at the basics this film works. Yuen Tak, known for being part of the same troupe as Golden Harvest legends like Jackie Chan, Sammo Hung, and Yuen Baio, delivers a fun performance as the young student of the more serious and stern Chen Kuan Tai. This leads the audience to really root for him as he works his way up to being a master himself as he heads towards an inevitable showdown with the Three Devils. The supporting cast is hit or miss, mostly due to some of the slapstick humor on display here – an obvious attempt from Shaw Brothers as they desperately tried to insert the comedy that was working over at Golden Harvest in the early 80s, and it lends the film to being a mixed bag on its foundation.


Director Lu Chin Ku and fight choreographer Hsu Hsia correct some of the cliché elements and forced humor in the film with style. The former adds some slick visual work to keep us interested even when the film meanders too far away from what’s working and the latter steals the show with the ridiculously entertaining battles of the film. Seriously though, Yuen Tak is one hell of a gymnast to be able to pull off the acrobatics of the fight sequences. Partnered with some great sets for him to use to defeat the Three Devils, the fights in The Master are easily the highlight of the film and the one true reason to delve into the film.

While I had a lot of fun with The Master, it’s probably not going to make my favorite Shaw Brothers list. It’s generally a pretty generic film and it’s obvious at times that the Shaw Brothers were scrapping to make this film a crowd pleaser. They even threw in a sequence with some topless prostitutes that sticks out like a sore thumb in the narrative scheme. The fights are pretty brilliantly shot and choreographed, but beyond that and a charming lead performance The Master is mostly for die hard fans.