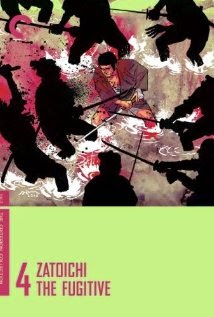 When going into a franchise, usually by three or four films in, there will be a dip in quality or at least a pretty significant shift away from what the style of earlier entries. For the Zatoichi franchise, the fourth film might actually be my favorite and it’s just as striking as the debut. There is definitely a few shifts in style from the last few, but it actually works in the films benefit instead of detracting away from the core elements that make the series great. It’s not a film that all fans of the first three will agree with me on, but dammit, Zatoichi the Fugitive is both highly entertaining and emotionally impactful.

Zatoichi (Shintaro Katsu), while continuing to journey on his way through the Japanese summer heat, finds himself being hunted for a price on his head. To discover just why he has now been labeled a fugitive, he travels to a village where warring yakuza bosses are intent on overthrowing one another by scheming with a vicious ronin who just so happens to be married to a woman from Zatoichi’s past…

This fourth entry starts off like a serialized entry of the series by having Zatoichi kill a would be assassin who wants to claim the price on his head for his mother. This leads Zatoichi to the village of our villainous mob of yakuza where he begins to unravel a tense situation that directs him towards a trap as he tries to help those of righteous cause. Shintaro Katsu once again pushes the character of Zatoichi into some new territories where he tries to right the wrongs of this small village, bringing his dark and tragic past with him. The film is actually carried by some strong secondary characters, including a boiling performance from Yutaro Hojo as the arrogant ronin, and a few very intriguing pieces including his attempts to straighten out the path of two star crossed lovers.

Like the previous films before it, Zatoichi the Fugitive relies on a thread from one of the previous films to give it some emotional weight. This time around it’s the return of Zatoichi’s love from the first film Otane, played with a tragic soul by Masayo Banri. This twist appears well into the film and really adds a nice emotional streak to the already strong script and connects the films so that Zatoichi’s arc becomes something of an extension. By the end of the film, she becomes a catalyst that really deepens the epic story of Zatoichi in a new way that pays off in dividends.

I did speak of a few shifts in style for Zatoichi the Fugitive earlier and they add a new layer that audiences haven’t seen before in the series. Firstly, this is the first film to pull away from the dense atmosphere of all of the previous entries. Even though it comes from the same director has New Tale, he moves the film towards a higher energy and speed that really makes the film feel more electric. He still throws in plenty of great visuals and slick camera work to sell it, but it’s a new style that works nonetheless. Secondly, the film significantly jacks up the action. Not only is their more action throughout the film, including a fun little sumo romp, but the finale is perhaps the series’ biggest action set piece yet where our anti-hero must slice n’ dice his way through a small army to seek his prey. The finale is simply phenomenal.

While it might be easy to see why some folks wouldn’t enjoy this entry as much (the move away from atmosphere and a slightly more consumable approach to the writing), the changes were brilliantly played out by director Tanaka. This film may not be quite as tragic nor deep, but the blend of action and emotional depth to a rather basic premise is executed at the top of the line. I would even go as far as to say that it’s my favorite of the franchise thus far because of this ability. Here’s to hoping that Zatoichi on the Road is able to match this fine entry.

Written By Matt Reifschneider
Posted by DarkReif at 12:50 AM