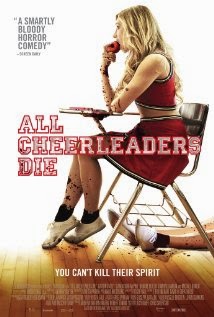 As a big fan of Lucky McKee’s films, I was eager to see what he would have his sleeve after the controversial (and astoundingly effective) The Woman. When I found it he would be co-directing a film called All Cheerleaders Die, I felt a little unsure. As a director he has always throw in subtext about feminism and the strength of women in his films, but this seemed like this might be the one time he sold out to the mainstream media. Shockingly though, for a movie about killer undead cheerleaders, All Cheerleaders Die contains all the elements that have come to make his films great – all the while paying homage to the unlikeliest of horror film eras…the 90s and early 00s.

Maddy (Stasey) is looking to make senior year her year. After the unlikely death of her friend Alexis (Cooper) the year prior, she is looking to right the wrongs that had happened and ends up joining the cheerleading squad. She has an underhanded plan though to make the guilty pay and nothing…not even death…is going to stop her from her goal.

As it would turn out, All Cheerleaders Die is technically a remake. It’s a remake of a 2001 film of the same name made by the same two guys, McKee and Sivertson. I have not seen the original film so comparisons will probably not happen in this review unless its an accident. It does, however, explain some of the stylistic choices of this film to homage the dark ages of horror in the late 90s and the 00s. The entire teens in high school plot focusing on cheerleaders and football players seems something that would have come right out of the flood of Scream knock offs that happened in this era, just ten years later. Luckily, the combination of McKee and Sivertson seem to understand a lot of how these tropes work and they throw in just enough dark humor and modern techniques that the film almost comes out as a parody of that time period. The opening sequence is done ‘found footage style’ but it builds a nice intro that quickly ends on one of the greatest deaths for horror in 2014 (and being quite hilarious at that.) While some of the pitfalls of that era plague this film (shallow secondary characters and a reliance on high school issues like how important image is and bullshit like that), the general strength of the execution helps out the film immensely and All Cheeleaders Die comes off as a charming film with much more subtext then expected.


It’s this subtext that really allows All Cheerleaders Die to be much more than just ‘another teen horror movie.’ Like most of McKee’s other flicks, it contains a substantial amount of exploration into issue that affect young women in today’s society. Everything from the use physical appearance as an expectation of quality of person to rape. In fact, the film spends a majority of its time exploring these young cheerleaders and jocks in an effort to really build this thoughtful relationship with the audience. The cheerleaders don’t even die until halfway into the film and the real horror doesn’t really start until that point either. From there though, it gets a strong dose of great campy horror elements that add a lot of fun to the proceedings including a fantastic third act that makes all of the character building worth it.

All Cheerleaders Die is the kind of film that really grew on me. When I first watched it, I enjoyed it for its strong throwback elements and impressive execution by the directing team. The more it sat with me after the fact, the more I liked it though. Now that I have spun my copy twice I have to say it’s one of my favorite horror films of the year. It’s not a film for everyone with its dry, dark humor and weird cliché twists, but for those willing to go into it with an open mind I highly recommend it.