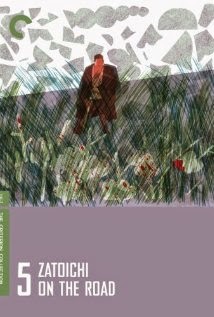 “He has something to show this blind man, he said. I’d like to see that.” –Zatoichi

After the phenomenal fourth entry into the series, it could only be assumed that the series would have to head down even if it’s just a fraction of quality. For the fifth entry of the series, Zatoichi on the Road, the series heads further towards being serialized and moving away from the series of events and characters that linked the first four films.  It’s not a horrible thing as this entry is still highly entertaining through and through, but this film certainly doesn’t carry the emotional impact that some of the previous entries did…despite some valiant efforts to do so.

Like always, Zatoichi (Shintaro Katsu) is on the road being escorted to Doyoma as a guest of the yakuza boss there when he stumbles upon a dying old man. He promises to the old man to take a young woman Mitsu (Shiho Fujimura)  home to Edo who is on the run from some samurai. To make matters worse, he is being chased himself by some assassins trying to prevent him from reaching Doyoma. It’s going to be one of those weeks.

While being the weakest of the entries into the franchise thus far, Zatoichi on the Road is still a pretty fun flick. It lends itself to some comparisons to the first film, particularly in the plot line where Zatoichi is being drafted into a gang war between two rival clans, but the execution is drastically different. Zatoichi on the Road pulls away from the stronger emotional punches and focuses more on a pulpy approach. Instead of being a film about Zatoichi the Tragic, it’s a film about Zatoichi the Badass. There is more action and Zatoichi spends a good portion of his time acting more like a hero than an anti-hero. Don’t get me wrong, his character is most certainly a sword slashing badass that’s punctuated by scenes where he kills three men while sitting or getting a drink of water in the middle of the big finale sword battle. Luckily the script is twisty-turny enough to earn some of its own dramatic beats (Zatoichi’s almost fatherly interactions with the young woman and the young yakuza at the end for example), but this one feels more like entertainment than the previous entries.

Perhaps the biggest change though comes in the director’s chair of the film. Yasuda gears the film towards that more entertaining path, but he certainly lacks the visual flair of some of the previous directors. He is helped by a great cast to add some charm to the proceedings, Shintaro is brilliant as always and Fujimura adds a lot of great balance to his role. While the villains here are not quite as good as the last couple we’ve seen in the franchise, it’s hard to say that they don’t aptly do their job though.

Zatoichi on the Road is my least favorite of the franchise thus far, but it’s still a decently entertaining ride. It still contains some really strong character moments and the action is fantastically done, but it misses the emotional and tragic themes that pushed the other films into being instant classics.