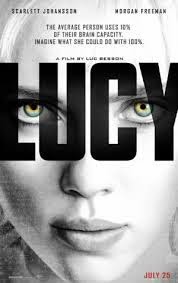 Luc Besson has always been one of my favorite directors. While his films may not always been the artistic gut punches as they were in his early career with La Femme Nikita or Leon, it’s hard for me to deny that I’m not thoroughly entrained by most of them. For Lucy, I was pretty hyped. The trailer seemed to indicate a return to a more action/pulp oriented style and the cast caught my attention. Don’t be fooled though, Lucy is quite different overall than the trailer would have indicated. It’s still fun, but the film can still be relatively off putting in the final act.

Lucy (Johansson), a college girl in Taiwan, has had a rough night drinking with her new boyfriend. When he sets her up to deliver a package for him to a vicious crime lord (Choi Min Sik), she finds herself with some new drug stitched into her stomach. As the package begins to leak though, she finds herself gaining powers…exponentially.

When Lucy first started, I was totally into it. The quirky nature of the ‘good girl in a bad situation’ who is suddenly given a B-grade action movie sense of physics and body manipulation, the intensity of Choi Min Sik (who is perhaps one of the most intense actors to ever grace the screen), and the weird cutting between Morgan Freeman’s speech as Morgan Freeman about cerebral usage and Johansson’s sudden abilities, work to deliver a fun and fast paced flick perfectly suited for Besson’s strong suits as a director. The film is certainly not great, but in a vulgar auteur manner it is massively entertaining and crazy enough to sell its bullshit science mumbo jumbo. The transformation from clueless college girl to badass of the minute was a fun transition that Johansson worked nicely and as her powers grow, the audience is able to run with it no matter how stupid they seem. I mean controlling radio and electronic waves? So many loopholes to what that actually means, but fuck it – it’s fun.

While not solely an action flick, Besson does what he does best with the cat and mouse chase elements to make it exciting and fun; pummeling the audience with gangster against cops shoot outs, a high speed car chase through the streets of Paris (that despite the sometimes awkward CGI made me crave a new entry into Besson’s Taxi franchise), and ScarJo powers that allow her to put people to sleep or lift them in the air. The problem of Lucy then rears its head in the final act as Luc Besson suddenly starts taking his own mumbo jumbo seriously. Don’t misunderstand me, some of the quirk is still there particularly when time becomes malleable in the final act, but it loses some of the fun when it becomes too philosophical for its own good. To say that the last act is bat shit insane just might be an understatement. The film folds in on itself and the previous plot holes and inconsistencies that the audience was able to write off as fun suddenly become glaringly real again. It’s striking how disorienting this sudden change feels and it left me wandering the halls after my showing trying to figure out just what Lucy wanted to accomplish.

In a nutshell, Lucy is a film that is one hour and fifteen minutes of classic Besson entertainment that cannibalizes itself in the last fifteen minutes. It utterly derails a lot of fun that could have been had with the film. Lucy is still a fun experience as a whole and offers quite a bit of fun B-grade entertainment with A-grade budgets, but I would lying if I said that I didn’t end up leaving disappointed after my showing. I recommend this mostly for Besson fans.