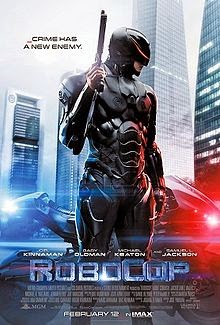 Hollywood continually makes one mistake with a lot of their remakes. Just because a film has a die hard cult following, doesn’t mean that it’s going to translate well for a modern audience and that the cult audience may not take kindly to a new ‘vision’ of the art they so appreciate. Take this Robocop remake as a prime example. No matter how much you try to give it a modern spin with talk about drones and man vs technology, the core concept and execution of the original film just couldn’t be done a second time. Call it ‘right time, right place’ or whatever, but this reincarnation of the Robocop legacy seemingly falters in almost every category to the original. It has its own strengths, sort of, but even then it’s hard to justify this film overall.

Murphy (Kinnaman) is a good hard working cop with a wonderful family, but when he uncovers a larger crime syndicate operating in his city he is martyred for his cause. That’s not the end of his story though as a military conglomerate OmniCorp and a scientist (Oldman) on the brink of new research take Murphy and give him the latest in cybernetic bodily advancements to keep him on the streets fighting crime.

Director Jose Padilha stunned with his awesome Elite Squad police drama flicks, but outside of a few moments a lot of his vision and style seems lost in Robocop. Most of this has to do with the story, which tends to try and focus on too many elements. There are three major plot lines that exist in the film that Robocop attempts at intertwining and has a lot of trouble doing so. Firstly there is the Murphy and family plot. This version of Robocop spends a lot more time establishing Murphy as a father and husband to increase the presence of his struggle at being human and against his robotic protocol in the latter half of the film. While this portion does tend to be the strongest of the three plot progressions, it still struggles to find a balance against the other two. Secondly, Robocop attempts to pull on the political and social questions about the use of technology and drones in modern warfare. While I appreciate the concepts being brought into a mainstream film, it’s pretty surface level stuff here and never really digs into the matter like it might have. As is, the ‘robophobia’ spin feels more like a last minute addition than a true driving ideological force to the film. Finally, the last plot line is the actual plot that concerns Murphy’s discovery of a crime conspiracy. As the film desperately tries to balance all of these psychological and social themes, it sort of forgets that there needs to be a damn villain in the film. So it stumbles around with police corruption, corporate puppeteering and espionage, and gun smuggling. It feels like the film is never sure which direction it wants to actually go with the plot and so it sort of just meanders about between a slew of different paths…which is ultimately a frustrating endeavor for the audience.

Take what you will from the massively hit or miss script, but this is a fucking Robocop film. Even Robocop 2 had a mediocre script that was made wholly enjoyable by its comic book execution and awesome action. Not so much here, folks. Even though I loved the realistic tone that Padilha used in his Elite Squad movies, it doesn’t quite work as well here particularly with the massive amounts of cheesy CGI thrown in. The ED-209 battles are modern day spectacle that lack tension and the faster pace of the action lends itself to feeling too much like a superhero film rather than a science fiction action flick. There is one piece that I felt was pretty unique and that’s the siege on the gun runners that’s done in the dark and punctuated by muzzle flashes and the red lights on Robocop’s suit. Outside of that though, I wasn’t wholly impressed here either.

By all means, Robocop is not a terrible film. It’s a serviceable action thriller with some science fiction twists, but it just has the terrible fortune of being compared to one of the greatest cult films ever. It tries to do too much, it loses much of the satirical nature of the franchise previously (particularly in its neutered PG-13 format), and the modern spin on the direction makes it feel more like a video game than a representation of reality that it should be a parallel towards. Quite simply, it misses all the opportunities that it could have improved upon.