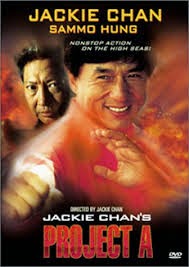 The combination of early Jackie Chan stunt extravaganza, a cast featuring Yuen Biao and Sammo Hung, and a plot about a Navy plan to take down some vicious pirates sounds pretty awesome. So don’t question the script issues and the million-miles-per-hour pacing and do what I did with Project A and just run with it. If you do, you will find Project A to be a spectacular action flick filled with colorful characters and fun fight sequences. It’s the way that a film like this should be enjoyed whether or not it’s perfect.

Dragon Ma (Jackie Chan) is quickly rising through the ranks as a Navel officer, but their lack of success as a group in catching some dastardly pirates has left them in some hot water with the budgeting folks. When many of the officers in the Navy are forced to retrain in the police force under Inspector Hong Tin-Tsu (Yuen Biao), Dragon Ma butts heads with the idea. When a chance encounter with an old friend Fats (Sammo Hung) has Dragon Ma in a place to uncover the pirate layer, can he put aside his own ego to get the job done?

When one becomes a film critic (whether it be professionally or not), you will always have battles with yourself over specific kinds of film. Project A is the kind of film that almost gave me schizophrenia while watching it. One part of me, the critic, heavily questioned the random flow of the film, the obvious set ups for gimmick riddled action/stunt set pieces, and for the rather flat character arcs of our main hero and his two ‘sidekicks.’ Project A is not a perfect film. It’s like the flick is two films mashed together – the first half being a Naval/Police rivalry with comedic beats and the second half being a much more serious action flick about cops and pirates. It starts a lot of plot elements and quickly shifts them in different directions. The entire Naval/Police rivalry seems dropped too quickly in the script despite the great set up. The inclusion of Fats (played with delightful cheese by Sammo Hung) shows up much too late and adds little in the way of strong character growth for our hero. Even the main pirate spin on the film almost seems like an afterthought until the last third of the flick where they finally introduce us to the charismatic pirate king and his island. As a critic, Project A was almost frustrating at times.


This, of course, is the critic in me speaking and too often over analyzing films. The other part of me consumed this movie vigorously and haphazardly. This is the 15 year old that fell in love with martial arts film and Jackie Chan in particular. For this part of my psyche, Project A is the perfect film. The slapstick humor is handled to perfection by Jackie Chan and his phenomenal stunt team, the charismatic combination of Jackie Chan, Yuen Biao, and Sammo Hung is like watching magic happen in front of you (particularly when they have to team up at the end to fight the beastly pirate king,) and to top it off – the gimmick riddled stunt work is top of the line stuff showcasing Jackie Chan at the height of his career in the 80s doing some of the most jaw dropping bits you have ever seen. Whether it’s the police bust where Chan and Biao have to fight their way through a high end gambling hall or the before mentioned 3 on 1 throwdown with the pirate king, the action in Project A is beyond impressively choreographed and spectacular in execution. I was ecstatic just watching it all.

Going into Project A, you have to make a decision. Am I going to watch this critically or am I going to run with it at full speed and see where it takes me? One will leave you a bit disappointed overall, but the other will leave you trying to see if you can leap from a chandelier onto a staircase, doctor bills be damned.  I highly suggest watching it in the latter mindset. Sure some of the writing and characters might not sit well with you, but it’s part of the outrageous fun of this film. Set sail and let the wind carry you on a pirate adventure.