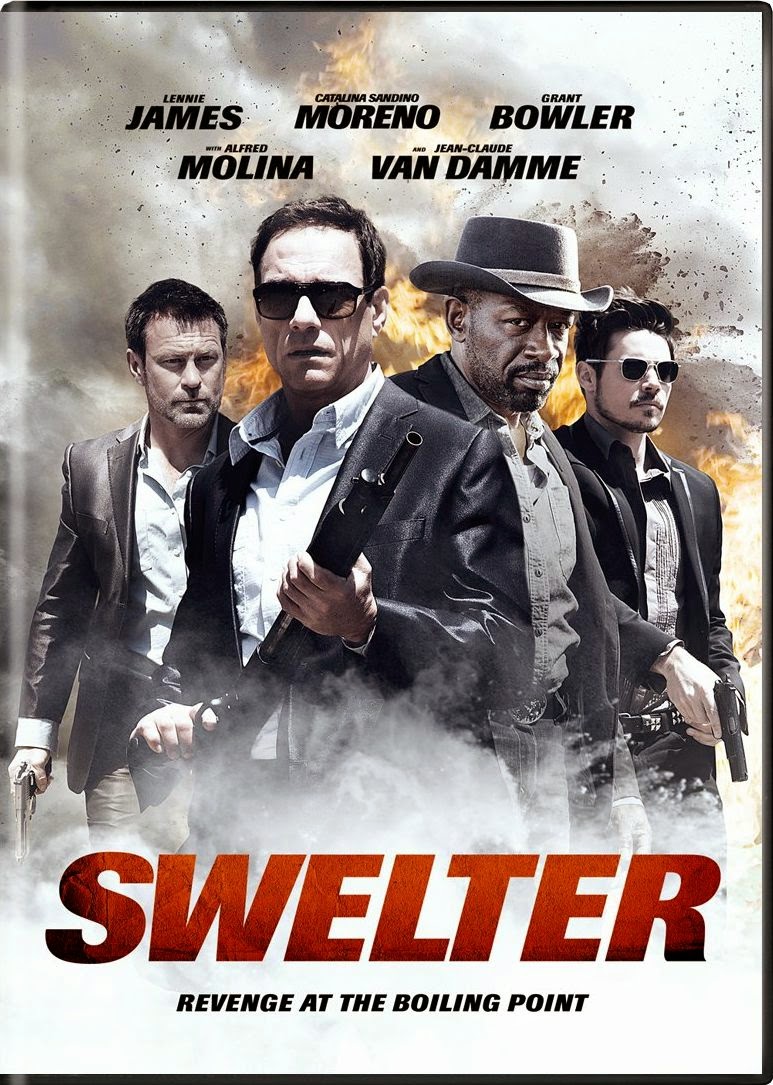 While the golden age of the western has long since passed, by decades even, the genre occasionally arrives in bursts. As of lately, there seems to be a rather steady stream of direct to video westerns that have hit the shelves and found their way into Redboxes across the US. For the most part, I skip out on these films. The genre doesn’t offer enough for me to truly go out of my way to partake in most of these trashy flicks. So when I stuck in the new thriller Swelter that arrived on my doorstep, I was a bit shocked to see it was a modern western. While it’s not quite as awesome as The Proposition or Red Hill in terms of awesome modern westerns, I was pleasantly surprised with the film that greeted me. It’s flawed in some of its writing, but dammit I have to give it a big ‘A’ for effort.

When four criminals arrive in the small town of Baker just outside of Las Vegas, they start a ruckus for the simple folk. A local sheriff (James), a man with a bullet in his head and no memory of his past, will have to figure out just what these semi-homicidal men want from the small town before they burn it to the ground…and discover a past he has been running from for far too long.

Building on the tropes of the western genre, Swelter takes the modern thriller and mixes it with an old school sensibility that works. Director/writer Keith Parmer seemingly knows the western genre in and out as he piles on homages throughout the film. The thriller aspects of the film, think of a slightly B-grade A History of Violence for starters, works to keep the western elements modern. Most of the heist elements are done in flashback form, outside of the films introduction, but it adds some nice depth with strong character interactions.

Our hero is a torn soul, played by the versatile cult actor Lennie James (you might know him from Blood Brothers favorites like Snatch or Lockout) looking to escape his heist heavy past. His strong lead work is counterbalanced by some broad stroke secondary characters that help to build an old school spaghetti western feel. The four villains of the film steal most of the scenes though with their quirks, the insane young one has a nice rattlesnake tail that he occasionally rattles and Jean-Claude Van Damme puts in a nice memorable performance here as the one desperately looking for redemption out of the pack. If anything, Keith Parmer populates the film with a ton of fun characters that make the film fly by.

Yet at the core, Swelter is still only an 8 million dollar film so it succumbs to a few B-grade elements. The last act tends to be a bit of a jumble as Parmer tries to throw in some more artful moments. Some don’t work, a church burning is great symbolism for the cannibalism of the town but really doesn’t flow or make sense in the narrative, and some do like the strong use of a symbolic heat wave in the story that builds some nice tension. Had the film had double it’s budget, Parmer might have been able to really build this film up even stronger – particularly with visuals since he obviously has an eye for visual storytelling that’s hindered by its funds. The action is solid for a low cost western though and it works much better than expected, but overall the film does waver under the weight of its own ambitions.

As is, Swelter is a pretty strong A-grade B-movie modern western. It’s far from perfect, many of the secondary actors struggle compared to the slew of cult favorites here (Molina does his best with a one note character) and the story tends to want to go further in many places that it simply doesn’t have time or money for, but compared to most of the western direct to home video trash that is being released this is some great entertainment. Keith Parmer has a strong future ahead of him in genre filmmaking and he will be one that the Blood Brothers keep an eye on.