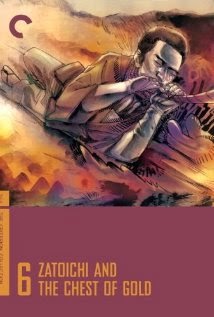 “See the joy on their faces? That’d be a pretty good trick for a blind man.” -Zatoichi

With Zatoichi and the Chest of Gold, this long running swordsman series sees the film move further away from their arthouse beginnings and more towards a grindhouse ending. Not that the change can be seen as bad, in fact Chest of Gold is quite entertaining, but it does mean that we get to see our blind anti-hero with some new elements in store for him in this sixth entry. Like the previous entry, Chest of Gold is a not nearly as impactful as one would hope and even loses more of the emotional weight in favor of bigger thrills and kills. It might continue the downward slide of overall quality in the franchise, but it’s hard not to love this film still.

Zatoichi (Shintaro Katsu) returns to a small village to pay respects to a man he killed years earlier, only to find himself under suspicion from the farmers for being the man who stole their tax payment on its way to the magistrate. To clear his name, he will have to uncover a larger conspiracy involving an old yakuza friend and a few corrupt officials. Can Zatoichi accomplish his task before his head winds up on the cutting block?

Zatoichi’s newest adventure is perhaps his most basic one yet, but that doesn’t stop the film from being some sword slashing entertainment. Chest of Gold adds in a slew of new tricks to make it more thrilling including a director who is less about the subtle emotions and more about big sweeping character gestures. This continues the entire ‘Zatoichi is a Badass’ theme from Zatoichi on the Road as he continually attempts to do his saintly work. This includes even more sword fighting, of which the series is adapting more complex choreography and for the first time in the series - gore, and a moment where Zatoichi outwits a rival ronin in speed to cut a coin in half. It also ends with a final showdown with the ronin (Katsu’s real life brother who would go on to play the lead in the Lone Wolf and Cub samurai series) that might be the most exciting and vicious one yet.

Despite the fun and increased amount of violence in the film, Zatoichi and the Chest of Gold does lack a bit of the depth needed to sell it. Outside of the continued brilliance of Katsu in the lead role and his scarred brother as the hired hand of the villains, not a lot of the characters actually stand out here. For a franchise known for its deep thoughtful characters and interactions, Chest of Gold is pretty flimsy with both as it introduces you to a ton of throw away characters and a hierarchy of villains that fails to balance out to Zatoichi’s badassness. Take it for what it is though because most of it didn’t affect my enjoyment of the picture.

Perhaps the biggest concern I have with Chest of Gold is the continued slide of quality for the franchise. This film is still a damn fine swordsman picture with plenty of great moments that Zatoichi/samurai fans will eat up, but the overall script quality seems rushed. It’s an entertaining film overall and the continued presence of Katsu sells it.