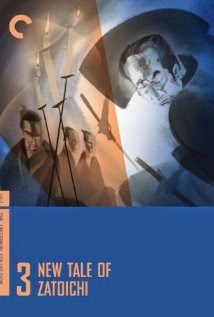 After being impressively swayed by the dramatic depth and entertaining characters of the first two films of the Zatoichi franchise, I was ecstatic to dig into the third entry New Tale of Zatoichi. What villainous story would be told? What new elements would be unveiled as Zatoichi continues his trek? Interestingly enough, this third film would mostly depart itself from many of the more entertaining elements of the first two films – including most of the humor and action set pieces – in favor for the massive dramatic beats, deep atmospheric character work, and a stronger philosophical subtext. It’s even more of a slow burner than either Tale or Continues, but it’s hard to deny the brilliant level or writing and character work that kicks this third film to being just as strong as it’s first two entries.

Zatoichi (Shintaro Katsu) has decided that it is high time to return to his village for a visit after the incident with his brother. There he meets with a slew of old friends, including his old master Banno (Seizaburo Kawazu) and Banno’s sister Yayoi (Mikiko Tsubouchi). He also learns of an impending duel with Kanbei’s brother who intends to avenge his brother’s death and gets involved with an evil clan who plan on earning some money from a kidnapping. Just another normal day for Zatoichi.

While the first two films definitely took a dramatic and character driven spin with the sword slashing genre, New Tale of Zatoichi takes it to a whole new echelon for the series thus far. The characters are richer, deeper, and more tragic this time around to really keep the audience hooked. Shintaro Katsu once again stuns as our titular antihero and the film lunges to enrichen his back story with hints towards his yakuza nature and how he is treated (and reviled) by most of society. In Shakespearian fashion, the film takes a very dark streak with all of its characters though as each one seemingly attempts to flee from a haunting past that tragically continues to sabotage their futures. Poverty plagues his homeland and even his friend, his master’s sister, is an embarrassment for not being marriage material. This lends itself a bit to the main plot, which is about a kidnapping and vengeful brother hunting down Zatoichi, but really, that’s minor compared to the atmosphere and characters.

Luckily, for a film with such a significant slow burn pace and subtle writing that relies on strong acting presence for its writing, director Tokuzo Tanaka handles it extremely well. It’s the first Zatoichi film of the series to be in color, yet Tanaka ably recreates the atmosphere and tone of the first two films and then proceeds to slather the film in visually stimulating shots that utilize the dark streaks and bright hopes for the characters in lush ways. Everything seems to carry an emotional weight in New Tale of Zatoichi even the finale where Zatoichi finally finds himself confronting a rival gang and we get our climactic and brief sword fight, it’s more for emotional punch than anything else.

The lacking action and more subtle approach in New Tale will not be for everyone. Even with it’s more than impressive execution, even I felt that the film was a step down from the balance of the first two. That being said though, the emotional and storytelling impact of the film is phenomenal and more than worth the time for an audience to invest. It’s a slightly different change of focus for the franchise, but it still works in the end.