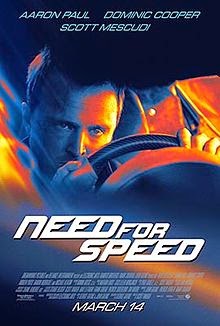 When it comes to film adaptations of videogames, I can’t say I necessarily have high expectations. When it’s an adaptation of a racing game, then color my expectations even lower than normal. These expectations might be the reason I was so pleasantly surprised with the quality of Need For Speed. It’s definitely not a perfect film, but when your core basis is a game where you simply outrace others and run from cops then most things are going to be an upgrade in quality. The film does tend to be a mixed bag at times as it blends the various aspects of race, drama, and action, but overall it does hold it’s own.

Tobey (Paul) has had trouble making ends meet for his garage and the late night races don’t quite do it. When an old nemesis Dino (Cooper) wants him to work on the a dream car for big money, he can’t say no…but things spiral out of control and it leaves Tobey convicted of a crime he didn’t commit. To prove his innocence when he gets out, he looks to challenge Dino to a race he can’t refuse…but he’s got a long way to go and a short time to do it in.

I think the key to the success of Need For Speed lies in the hands of director Scott Waugh. As a former stuntman and stunt coordinator, he simply gets it when it comes to a film like this. Right away in the opening race sequence, it’s obvious that he has a knack for filming and owning action sequences with the night color palettes and smart camera work. None of that quick edit bullshit, he shows us objects moving through space and paces it perfectly. He does this consistently throughout the film, owning the car stunts throughout (explosions too!) no matter how ridiculous the script seems to get. By the finale, the biggest nod the namesake game franchise, I felt like he might be one of the best directors to hit the action scene in quite some time.

From there though, the film is a bit more hit or miss. Aaron Paul is given a character that’s almost too subtle with his under brow stares and lacking dialogue and many of the dramatic beats are a bit forced – particularly when it comes to his rivalry with Domic Cooper’s character Dino which includes a really awkward old girlfriend subplot that doesn’t really work. Luckily, Need For Speed seemingly knows this and doesn’t spend too much time with extensive character moments and keeps the pacing fast and furious (see what I did there?). The chemistry between Paul and Poots is fun and works much better than I would have ever expected and a silly running commentary from Michael Keaton’s reclusive racing host is B-grade hilarity. Where the film doesn’t succeed in deep thoughtful dramatic moments, it makes up for in fun charismatic streaks.

While Need For Speed isn’t an Oscar contender, for a video game adaptation it’s one of the best. The pacing is strong despite being a bit overlong and Waugh takes a sub-mediocre script and makes it a fun and action oriented film that’s worthy of the namesake. This was definitely one of the bigger surprises for 2014 and one that comes with my recommendation for those who enjoy a good car film.