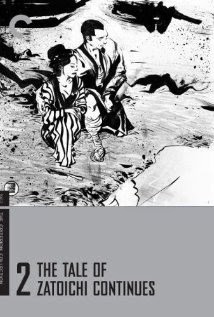 Due to the lack of home video and limited theatrical showings, many films from the decades before the 80s played out more like serials. Instead of direct sequels, they would have characters return for ‘another adventure’ or ‘another quest’ instead of relying so directly on previous entries. This is how I assumed the Zatoichi series would play out, but when they called the second film The Tale of Zatoichi Continues they sure as hell meant it. It’s a direct sequel to the first film, pulling heavily (with little in the way of exposition) on those events and building on top of them to deliver a film that almost matches the awesome execution of The Tale of Zatoichi.

Zatoichi (Shintaro Katsu) has been wandering about his way for the last year and has decided to fulfill his promise to return to the slain samurai’s grave in the small village where he vanquished him. Unfortunately, on his way there he has come until some unwanted knowledge about a traveling lord that his a league of samurai out for his head. On top of that, a mysterious traveling ronin and his sidekick have taken an interest in Zatoichi too, leading them towards an inevitable battle founded in the past.

The Tale of Zatoichi Continues starts off as one of the serials that I mentioned before. Zatoichi, once again played with a convincing depth and wide array of emotional bursts by Shintaro Katsu, finds himself on the wrong end of some pissed off folks although this time not of his doing. At first I wasn’t quite as sold on this approach. The wayward one armed ronin who seems to be following Zatoichi, the geisha who helps him, the evil lord; they all seemed to lack the impact and character depth that really built the first film up. Yet about half way through the film, the revelations about some of these folks come to the forefront – including an awesome twist that brings the ronin and his chasers clashing in the final act – and the film suddenly carries a lot of weight to it and the pay off is utterly worth it.

At a ridiculously brisk 72 minutes, Continues packs a lot of punch in a very short time. With a new director at the helm, Kazuo Mori emulates the atmosphere and style of the first one pretty impressively. There is a bit more action to be had, including a more traditional feeling sword fight in the opening bit and another pending duel in the last act that add to the stakes. Truthfully there are only two things that hinder this sequel from reaching the heights of the first film and it’s the rather melodramatic score and the odd way that end of the film occurs. Neither are huge determents towards the samurai film experience, but do pull it back just enough.

For those of you that loved the The Tale of Zatoichi then following it up with this direct sequel is a must. It’s not quite as effect as the first, but the combination of smart writing, another round of brilliant characters, and a fantastic final act make this second film of the franchise a must see for samurai fans. I would even suggest watching it back to back with the first for better impact as I did.