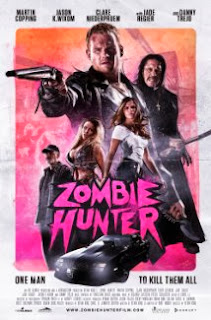 The grindhhouse genre has had something of a revitalization in the mainstream in the last decade. Thanks to the charm of famous directors like Quinton Tarantino and Robert Rodriguez, the beloved low budget cult genres are getting more exposure to younger generations and it's creating an interesting mix of young film makers damaging the style. "Zombie Hunter" is a prime example. It's a mixture of post apocalyptic film noir, comedy, and horror that's crafted with enough charm and effort that it's easy to have fun with despite it's obvious low budget and uneven narrative.

After a relatively irrelevant opening sequence that gives us a bit of background to the initial spread of a zombie plague, "Zombie Hunter" starts off on the right foot. We are introduced to our Snake Pliskin inspired hero (driven by an overly serious, but just hammed up enough performance by Copping) who drives around in a zombie littered apocalyptic desert at high speeds and killing as many zombies as he can. This portion of the film is driven by a fun and gravel throated narration that lacquers the low budget and stylistic approach with a neo noir technique, allowing our hero to spout of ridiculous (and hilarious) lines about his outlook on life since the zombies spread. While some of the CGI gore in this first half tends to bog down the quality, this noir-grindhouse approach to the violence and tongue in cheek acting is simply a blast to watch.

Unfortunately, the style of this sputters in the latter half of the film. When he is introduced to a group of survivors in the wasteland, led by an axe wielding preacher played by the iconic (and almost 70 year old) Danny Trejo, the film tends to meander a bit. The character narration is split between our hunter and a new female character a handful of times and the film tends to try to jump genres and focuses a bit by adding in a slasher sequence of a man in clown make up with a chainsaw and even going further towards a science fiction slant by adding in CGI monsters that look like they were stolen from a SyFy original "Resident Evil" knock off film. By the time the film reached its finale, it had lost a lot of steam with some terrible secondary cast performances and unfocused storytelling and I wasn't having near as much fun with it as I did in the start.

While the writing could have used a bit of tightening and the acting overall could have used a boost, I still had quite a bit of fun with "Zombie Hunter." It's not a film for everyone with its heightened stylistic choices (and use of the color bright pink as the color of zombie blood) and tongue in cheek approach, but for those fans of modern films that are foundationally structured by the likes of grindhosue and Troma then I highly suggest giving this film a shot. It's a ridiculous film and if you are willing to take a bite into "Zombie Hunter" then you are going to come out entertained.