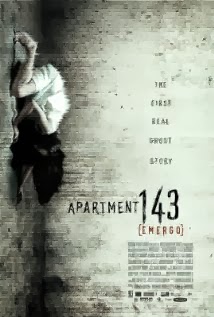 At this point, it's damn near tradition that every October I have to find some low budget found footage ghost film to review. Since this will be the first October without a "Paranormal Activity" for me to hit up, I was left looking for one on my own. That's when I realized I owned one that I hadn't even watched before. That film was "Apartment 143." While the film might have a few moments to ride on, including a few intriguing performances, overall its a rather incohesive smattering of random pieced together scenes and a confusing narrative...not to mention a slew of by-the-book scares that we've seen a dozen times before.

So to be honest, I'm going to keep this review short and sweet. You've seen "Apartment 143" before and you've seen it better if you're a horror fan. While the main concept of the spirit not being a ghost in the classical sense but a manifestation of misguided energy is a rather interesting one, very rarely does the film capitalize on the depth that is hinted at in its script. It wants to create a mystery around the family and what happened to the mother, but it fails to give us enough meat to feast on and the film tends to try and throw red herrings around with issues like child abuse and mistreated illnesses that are never realized and just confuse the narration of what we are meant to be viewing. "Apartment 143" desperately wants to add in some social context to the found footage ghost film, but it never goes far enough with it to work and it left me disappointed in the missed opportunities. Thusly, we are left with a series of "tests" by our supernatural scientists that feel no real connection to the characters or to the general plot progression and it feels like we are just jumping from sequence to sequence rather than seeing a story unfold.

From there, "Apartment 143" fails to truly invoke any real scares either. We've seen it done before and its been done with far better results. Furniture moves, cameras conveniently miss shit, we get shadowy figures, and just for shits and giggles they throw in a randomly manifesting...object? It's not explained at all and its lacking effectiveness doesn't heal the wounds either. There are a few moments that worked, a couple of "possessions" came by with some fun editing and jumps, and the acting was, believe it or not, perhaps the most consistently effective aspect of the film. We get a strong monologue towards the end from the father of the family and the young son steals a lot of the sequences with his bits of humor. If anything, it was the best part.

As a horror film though, I highly suggest skipping out on "Apartment 143." While it might not be as repetitively boring as the "Paranormal Activity" sequels, it's still an unmemorable and jumbled film that rarely finds its footing. Believe it or not, there are better films out there of this style...and outside of watching this for "free" on Netflix Streaming or the like - I wouldn't seek it out.