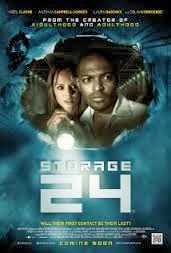 While "Storage 24" earned its fair share of praise from around the globe as a cult film, it took its sweet time to make it to the US. Of course, I wasn't one to run out and purchase the damn thing on release day as my skepticism of its director's history (who directed a SyFy film "Roadkill" previous - which I skipped) made me a bit cautious. So when I found it to watch on Netflix Streaming, I was all about it. Who wouldn't want to start off their Blood-tober Horrorfest with a modern "Alien" knock off in a storage unit?! To my surprise, director Johannes Roberts lifts this rather mundane B-grade script far above the limits it should have reached, delivering a film that has some fun special effects, some moments of strong tension, and enough flair to sell it all as something other then the "Alien" knock off it obviously is.

There's a lovable familiarity to "Storage 24" that needs to be addressed first. While Blood Brothers has covered more than the reasonable amount of "Alien" knock offs, the formula works with the right blend of atmosphere, terror, and effects. Roberts does his damndest to turn a lackluster and often quite silly script into something much more effective to some mixed results. The writing leaves us with depth-less characters, poor character choices, and a monster that doesn't necessarily have a rhyme or reason to what it does. Despite some occasionally strong acting from our main heroes of the film, their squabbles about a love triangle fail to inspire a whole lot of connection to the audience and the introduction of a few secondary characters (including the humorous but relatively awkward inclusion of a paranoid man who has been living in his storage unit where he runs a half dozen or so TVs on a car battery) makes for a film that tends to stutter as it tries to get going in the second half. Not something needed to get this kind of film to work like it should.

"Storage 24" also has a tendency to rely a bit too much on blue printed scare tactics and kills. While Johannes is quite capable of adding in some terror and suspense to these sequences with his extreme close ups and clever use of lighting and sound, the film is remarkably predictable. Guess who dies next? I'm sure you will have the outline of the film finished in the first 15 minutes like I did. The kills themselves were solid as "Storage 24" layers a wonderful combination of traditional special effects with a well placed CGI to get the mood across including a very creepy chase moment where our monster uses the close walls to actually run across the ceiling and despite some silly horror cliches overall, the kills are well done with plenty of gore for you gore hounds.

I've seen better "Alien" knock offs and I've seen a hell of a lot worse. "Storage 24" is more or less a great jumping point for a strong director like Roberts for him to move into better and higher budget territory as he carries the film through most of its run time. As a kick off for my Blood-tober Horrorfest 2013, it was a fine addition delivering the entertainment I wanted with just enough fun and strong special effects that I wasn't appalled by its script. While it might not be a film to immediately go out and buy, it was worth the watch. Recommended for horror fans with an open mind only.