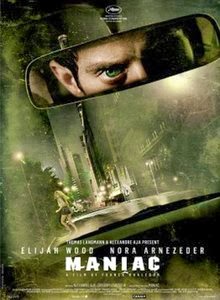 While I still consistently hear people bitch about remakes and reboots, there are occasionally remakes that impress. The most recent one is "Maniac," a combined French and American effort as a modernization of the 1980 cult slasher classic. While the original film earned its merits with strong special effects and the clever idea of having our slasher 'maniac' as the protagonist of the film, this remake takes the film to some intriguing new territory without ever losing the heart of what made the original a classic. It's then crafted with such an impressive execution that instead of comparing it throughout, I was completely engrossed with it.

As ironic as it is, many of those great remakes have Alexander Aja's name attached to them. In the case of this film, Aja only appears as co-writer and producer rather than director, but his touch can be felt in the deep atmosphere and extreme violence. It helps that his frequent collaborator Franck Khalfoun is the director who ably runs with the entire concept at full speed and throws himself into creating the gimmick of the film's visuals with intensity.

What gimmick with the visuals, you ask? The most unique part of "Maniac" is the fact that it's completely told from the first person view of our slasher protagonist. While the original film meant for us to be put into the shoes of our killer Frank, this remake literally does it. While initially I was hesitant about this, believing it to be a gimmick, "Maniac" has the writing, atmosphere, and visual flair that it sells it for the entire time. It leaves the film to do a lot of intriguing things with Elijah Wood in the lead (who is perfectly cast against type and utterly believable as this man-child whose reality is skewed) as we only see him in mirrors and reflective surfaces. The film also is able to bend reality a bit more with his "visions" as we see his mannequin collection come to life and moments with his dead mother and himself as a child haunt him daily despite his best attempts at making connections with regular people including his new friend Anna. The idea that having a film entirely in first-person might seem like a gimmick, but "Maniac" delivers it how it should be done.

From there, Khalfoun and Aja cake the film in that modern French horror concept of excessive atmosphere and excessive violence. Lots of effective lighting, a brilliant throwback synth score, properly spaced dialogue, and strong visuals build up a dense and often suffocating atmosphere and in true modern French horror style, "Maniac" uses brutal and visceral violence to break the tension. There are many moments that are truly cringe worthy (both with creepiness and in full on special effects focused violence) that even a hardcore horror fan like myself had to hold my breath. Scalping has surely never looked so real.

"Maniac" is certainly not a film for the faint of heart as it piles on eerie visuals, pressure building tension, and insanely brutal kills. It's a fairly slow burn pacing that might have fans who don't buy into yawning at times, but for those willing to dive into the shoes of our villainous protagonist "Maniac" is a manic and ultimately impressive remake that currently resides as my favorite horror film of the year.

Written By Matt Reifschneider
Posted by DarkReif at 3:32 PM