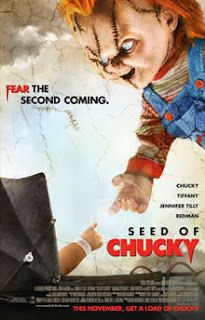 Despite some luke warm critical reception, "Seed Of Chucky" has always come highly recommended from the horror fans in the circles that I frequent. I had seen the film previously and wasn't all that impressed to be honest, so I kept pushing it back for review. With "Curse Of Chucky" due out this October, I decided it was high time to review both of the modern "Child's Play" films before reviewing the sixth entry. While "Seed" is a much better film than I remember, I still feel that the entire 'meta' experience of the film tends to hinder it substantially leaving it as the worst of the franchise as an unfocused film.

Plot wise, "Seed Of Chucky" tends to feel like two films mashed together. We have the main portion of the film that focuses on Chucky and Tiffany's newly found son Glen and the rest of the film focuses on how our newly found killer doll family is going to get their souls into human bodies. While both of these stories have their interesting elements, the bled of the two tends to leave a bit desired. As the film kicks off with a narrative about Glen and his search for his mother and father, once the film adds in our villains (who are more or less the protagonists this time around) it shifts gears and Glen more or less becomes the subplot for what the rest of the film goes for. 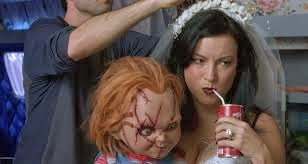 While the Glen story has some fun bits, it tends to be pretty weak overall as we deal some subject matter that isn't handled very well including gender issues and a family dynamic that works better for jokes then it does for anything with depth. The storytelling narrative tends to simply jump around to much for my tastes as each of our villains tries to deal with their own problems. Then to top it off, the film goes for a meta-sort of concept where our villains are resurrected on the set of a Chucky movie  and our main "hero" of the film ends up being Jennifer Tilly playing herself. In an odd way, the humor works for this (although they play the "voice joke" about Tilly's voice to death) even if some of it tries a little too hard - including a sequence where Chucky has to fill a cup with his semen in an obvious attempt to out awkward the doll sex sequence in "Bride." The humor might be the biggest hit or miss with audiences and it's hit or miss in general too. 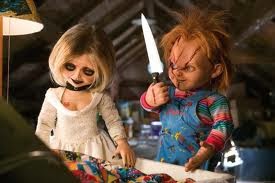 The meta approach to the film certainly carries some charm and the voice work from Douriff and Tilly make for some great moments (the argument about violence and violins had me on the floor), but overall this still ranks as my least favorite Chucky film. It's muddled in its narrative and often it plays the humor above and beyond the realms of good taste - and I'm talking about the Britney Spears scene. While it has its moments and continued strong use of puppetry, I'm not going to be revisiting it any time soon.